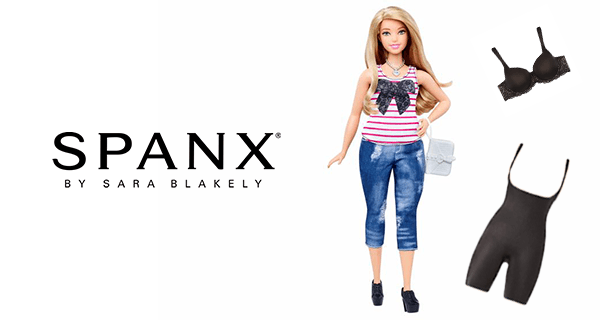 On Thursday, Mattel announced that Barbie will soon be available in three new body types, including a curvy one, which will come with equally realistic body-slimming accessories.

The accessories include a Spanx body shaper, a waist trainer corset, strategic long necklaces, and a slimming dress to counteract excess curves. For an additional $9.99, you’ll also be able to purchase a camera phone that only takes high angle photos. Once curvy Barbie is outfitted with all of her figure-minimizing gear, Mattel says her proportions will be exactly as unattainable as regular Barbie’s.

“We think it’s really important that little girls have dolls that reflect the real world around them,” said spokesperson Brandy McConnell. “So we made sure that curvy Barbie had all of the body-shaping tools she’d need to transform her flawed body into the unattainable standards she’d no doubt attempt to approximate as a woman in today’s world. Of course, that standard is regular Barbie.”

For decades, the doll’s waif-like appearance has been criticized for instilling an unhealthy body image in girls at a very young age. To make sure that the new dolls mirrored the proportions of real women, Mattel conducted extensive research to gain insight into the insecurities and unattainable ideals that haunt the average woman every waking minute of her life.

“Women have always been extremely concerned about having an impossibly tiny waist, but since Barbie has always had an impossibly tiny waist, girls didn’t have a doll that reflected the ridiculous pressure they felt to look perfect. With curvy Barbie, little girls can still have their totally out-of-reach beauty standards, while also having a way to futilely attempt to meet them. Finally, they have toys that will prepare them to be a size 10 adult trying to squeeze herself into a size 2 dress.”

For little girls who look up to their mothers as role models, Mattel will be rolling out a limited line of “Baby-Weight Barbies,” Barbie dolls that represent brand new moms who just haven’t managed to quite knock off that extra thirty pounds that comes with creating and bearing human life. These special addition dolls come pre-supplied with a breast-pump, scale, and Ken doll rocking a super sexy dad bod.

The toy manufacturer has also announced they will be releasing new friends for curvy Barbie, such as her Weight Watchers leader Cheryl, as well as a Barre class instructor for Barbie to compare herself to. Additionally, Mattel will launch a special Detox Cleanse Barbie, which will come complete with green smoothies and lemon water. If girls keep her on a constant liquid diet, she’ll shed pounds, but immediately balloon once she goes back to regular food.

“It’s extremely important for girls to understand at an early age how precariously their body weight will constantly teeter between kind of pudgy and dangerously thin,” said McConnell. “We’re really hoping that curvy Barbie will give little girls role models that are constantly struggling with society’s impossible standards, just like the real women around them.”