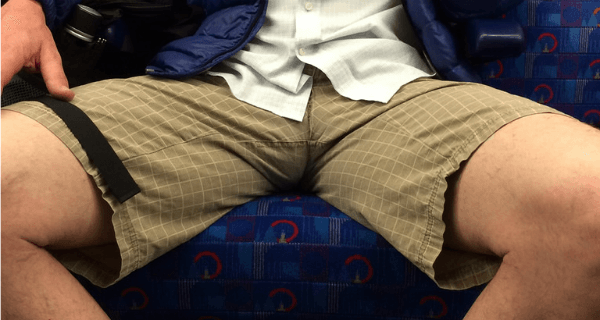 California resident Adina Pool, 25, was subjected to unspeakable horror late last week when a lunch date with her father took a devastating turn for the worse. Without warning and “totally out of nowhere,” the Chula Vista woman witnessed her father adjust his own penis and balls in the cargo shorts he was wearing, confirming an anatomical detail she had gone to great lengths to overlook for nearly 26 years.

“I don’t really want to talk about it,” said Pool.

Pool’s father, 63-year-old electrical engineer Robert Aguilar, had incorrectly assumed that the coast was clear to adjust his 63-year-old balls after Pool had exited the passenger seat of his 2014 Toyota Corolla. “I waited until we were both out but I guess she saw me before the door shut,” Aguilar said. “Whoopsie daisy!”

Aguilar’s humidity-induced misstep would find his adult daughter at a complete loss, leaving her with a saggy balls-shaped hole perhaps only the love of God himself could properly fill.

“I’ve heard about this kind of thing happening before, but I guess I just never thought it would happen to me,” Pool stated. “I mean, he used the Kohl’s birthday gift card I emailed him three years ago to buy those shorts, you would think he would show a little more respect for them.”

The thought of her own father’s reproductive organs – which sources confirm bear some responsibility for the creation of Pool herself – all smushed up and in need of adjusting in a pair of $14.99 Merona cargo shorts proved to be too much for the young woman. Pool was reportedly unable to shake the idea that her father’s balls were seated just opposite her in their shared booth at Olive Garden later that afternoon.

“I know guys do it all the time, but that’s my fucking dad, you know? It’s disgusting,” Pool says of the man who sacrificed the best years of his life to ensure the utmost comfort and safety of his only child.

Having miraculously survived the ordeal, Pool hopes to share what she has learned in an effort to prevent other adult daughters from having to acknowledge the fact that their own fathers’ balls sometimes get itchy, at times even sticking to “Their legs or their dicks or whatever is going on.”

“If I could give one piece of advice, I guess it would be to not look anywhere near your father’s balls, ever,” she suggests. “Or maybe just don’t live in a temperate climate in August for as long as he’s still alive, if at all possible.”