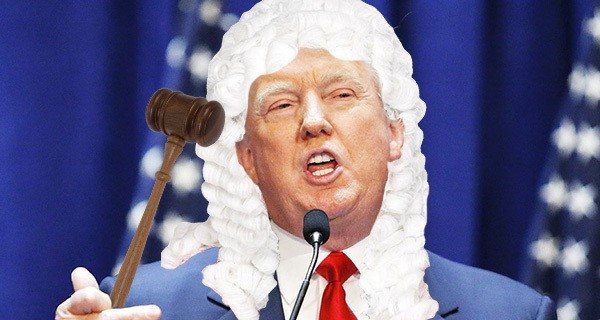 David Cohen, a top adviser to Donald Trump, apologized for his “You cannot rape your spouse” statement published in The Daily Beast on Monday. However, in a surprising turn of events, Cohen lifted a wig off his head to reveal that he was actually Donald Trump in disguise.

“Gotcha, nimrods!” he shouted with glee. “You guys really are a bunch of gullible losers.”

He then tore off his polyester lawyer robe and paraded around the room, bashing onlookers’ heads with a wooden gavel. “Lawyers don’t even use gavels, but guess what? I like the noise they make on a bunch of hollow skulls.”

The Republican candidate had originally worn the costume as a gag to distract from the recently resurfaced rape accusation from ex-wife Ivana Trump, but he decided to run with it when the media took it seriously. “I didn’t even change my voice, you retarded dummies,” Trump said.

The real estate tycoon also divulged that all other members of his “inner circle” have just been himself dressed in various getups bought at Ricky’s. “You dickless idiots actually believed I had other people advising me on the crazy shit I do? Wow, Americans are even dumber than I thought.”

According to a poll, the development has caused his popularity to surge even further. Says one supporter, “It just proves how authentic he is.”