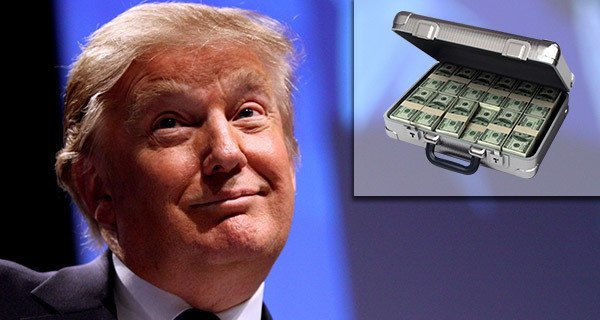 After over two decades of flirtation with running for the Oval Office, real estate mogul Donald Trump finally announced a 2016 presidential run by picking up a briefcase and slowly sliding it across a table.

“Heard you were looking for a president,” he told the audience at the Trump Tower. He then reached down and picked up a fireproof briefcase, which he slowly pushed across the table, then leaned back to take in the crowd’s reaction. After whispers spread across the room, he laughed fiendishly and nodded ever so slightly in the suitcase’s direction. “How’s that for a bid?”

Addressing his skeptics, he offered these words: “To those of you who don’t think I know about politics, I invite you up here to smell this cold, hard cash.” He opened the suitcase to reveal thousands of neatly stacked mint-condition bills, then leaned in and inhaled exaggeratedly. “Mmm… $700 million sure smells a lot like experience. Why don’t you treat yourself to a whiff?”

As for his stance on the economy, the 69-year-old said, “I’m sure you’re all wondering about how I’m gonna create jobs.” He then removed multiple stacks of cash from the suitcase and threw them out into the audience. “I think that settles it, you filthy animals.”

After denouncing the Obama administration’s foreign policy, Trump declared his own plans to be tougher on ISIS. “Allow me to elaborate,” he said, rubbing his hands together menacingly, then procured a $10,000 bill, doused it in lighter fluid, and set it on fire. He punctuated this by dropping the burning money onto the table and blowing the ashes out into the audience.

“Any questions?” he asked at the end of his speech. Then, in a final gesture, he pulled a lever, prompting millions of dollars to float down from the ceiling. “Didn’t think so.”

Want more of the latest from the 2016 presidential race? Check out U.S. Economy Added 243,000 Republican Presidential Candidates In May.