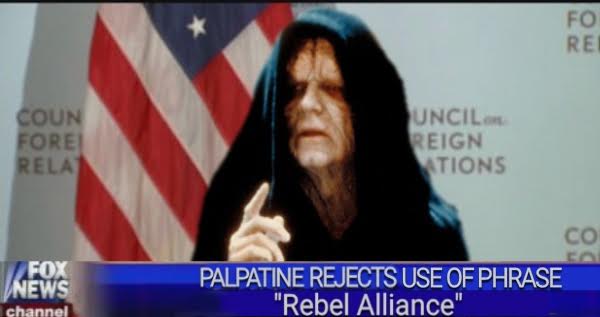 During a recent press conference held over the HoloNet, Emperor Palpatine once again refused to attribute the terrorist attack on the Death Star to the “Rebel Alliance.” He instead called the group responsible for the attack “The Alliance To Restore The Republic”-  a politically correct term many in the Palpatine administration use when discussing the armed militants responsible for several calculated strikes against the Empire; chief among them the destruction of the Death Star.

“What happened to the Death Star was just tragic, many Imperials lost their lives,” said Palpatine. “But we can’t blame all rebels for the actions of a few, and the Empire must not make this ragtag Alliance of insurgents out to be a bigger threat than they really are. If a JV squad puts on white armor, it doesn’t make them Stormtroopers!”

The press conference was the just the latest attempt by Palpatine to reassure the citizens of the Empire that they have nothing to fear from this “So-called ‘rebellion,’” but many Imperials remain unconvinced.

“Palpatine had the nerve to call the Rebel Alliance – excuse me, ‘The Alliance To Restore The Republic’ – the JV squad,” said Bob Fortuna, a Twi’lek spice farmer from Ryloth. “That JV squad committed the worst act of terror in Imperial History, killing over a million people and destroying millions, if not billions, of credits worth of military craft and hardware! Meanwhile, our Emperor is worried about ‘galactic climate change’ and offending rebel sympathizers. It makes me sick!”

Some Imperials like right-wing HoloNet news anchor B’llo Ryly have gone so far as to lay the blame for the Rebel Alliance’s very existence squarely on the Palpatine’s shoulders.

“When Palpatine and his right-hand robot-man Vader took out the Separatists, they created a power vacuum in the Outer Rim,” explained Ryly. “The Rebels swooped in and filled that vacuum, leading to our current situation. Thanks, Palpatine!”

“And this PC culture he’s cultivated is the worst!” Continued B’llo without any prompting. “First you can’t say ‘Happy Life Day,’ now you can’t say ‘Rebel Alliance?’ Jedi forbid that you start talking about the Clone Wars without giving someone a trigger warning first! They should never have taken the Force out of schools.”

Emperor Palpatine, however, maintains that despite the harsh criticism from conservative Imperials for not saying “Rebel Alliance,” the Empire is winning the war on terror.

“We just located a major Alliance stronghold in the Hoth system,” said Palpatine. “We are at this very moment preparing to overtake it with a strong ground assault led by AT-AT walkers.”

“On top of that,” continued the Emperor, “I’m pleased to announce that I’m building another Death Star…even bigger than the last one!”

“The only thing that could topple this Empire would be for the Jedi to make some sort of return,” said Palpatine, while cackling menacingly. “And we all know that ain’t gonna happen!”

The Emperor ended the press conference by exclaiming “Palpatine out!” and dropping his holo-projector.