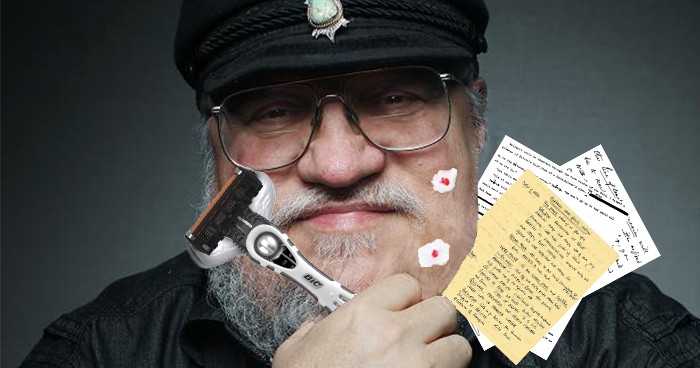 After years of waiting, Game Of Thrones fans will finally get to read the sixth book in the wildly popular A Song of Ice and Fire series, The Winds Of Winter, thanks to George R. R. Martin’s recent decision to shave. Martin was in the process of getting rid of the beard he’d had since 1974 when he discovered the final chapter of The Winds Of Winter hidden deep within his whiskers.

“I secretly finished the book back in 2015,” Martin admits sheepishly. “But somewhere between printing it out and bringing it to my editor, I misplaced the ending.”

According to Martin, he spent the better part of the last two years searching for the missing pages – everywhere from under his hat to his other pair of jeans – only to finally find them last week tucked under his ample facial hair.

“The constant whining from disappointed Game Of Thrones fans about never getting to read The Winds Of Winter was starting to bum me out so I decided to shave my beard, dye my hair and move to Canada to begin a new life as an alpaca farmer,” explains Martin about his decision to eliminate one of his most distinguishing physical attributes. “I got as far as shearing off the ol’ fur curtain when the missing Winds Of Winter pages just kind of fell into the sink with a loud ‘plop’. Thank god too because I fucking hate alpacas!”

A relieved George RR Martin says he quickly scooped the papers out the sink to minimize any water damage and brought them straight to his editor Jane Johnson to look over. “I was overjoyed when he told me that he finally located the missing part of the book,” says Johnson. “I was running out of excuses to tell the publisher when they asked me why the book wasn’t done yet. You can only use ‘He’s having trouble trying to figure out which character to brutally murder’ so many times, you know?”

“I still don’t know why he didn’t just rewrite the goddamn ending, or better yet, print out another copy,” continued Johnson. “But whatever, I’m just happy that we can get the book out in time for the seventh season of the show.”

According to Martin, he couldn’t have reprinted the book even if he wanted to thanks to his usual post-novel routine. “Every time I finish a book, I burn the computer I wrote it on and offer the ashes to the Old Gods in return for good book sales. It’s worked pretty well so far.”

Unfortunately, even though The Winds Of Winter can now be published it won’t come out soon enough to affect the ending of the Game of Thrones series on HBO, which has already been planned out with input from Martin.

“HBO asked me to come up with something just in case the books weren’t finished before they filmed the final season next year,” explains Martin. “Basically the series will end with Sean Bean waking up in bed as Boromir from Lord Of The Rings and complaining to his wife about the crazy dream he just had. I know it’s not great but hey, they called me while I was binge watching Orange Is The New Black and it was the first thing I could think of. What are you gonna do, right?”