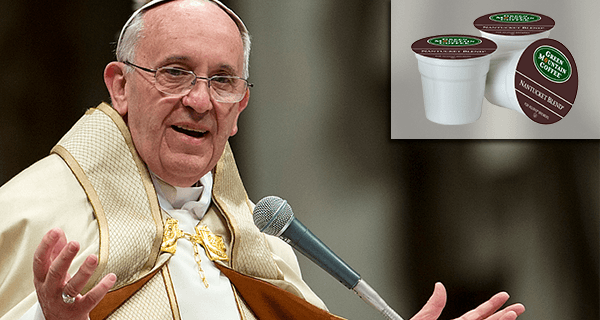 This morning, Pope Francis released a paper calling for swift action on climate change, urging not only people to take action, but God as well. Now, after years of using K-cups to brew a quick, easy cup every morning, the Lord has been asked to switch to a more environmentally friendly method of coffee making.

“When I first skimmed the paper and saw he was mostly yelling at rich people, I thought I was off the hook,” said the Almighty. “But then Frank—that’s what I call him—asked to have a few words this morning, and I knew exactly what was coming.”

When the Pope first summoned him, God asked if they could just talk later, but quickly realized he might as well get it over with. The Pope explained that K-Cups were not recyclable, and that it was irresponsible to keep using the product when many alternatives were available. “Come on, man. What’s one guys’ K-Cups gonna really do?” said God. “If everyone else stops, then mine shouldn’t be a big deal. Level with me here.”

When the Pope argued that it was his job to lead by example, God panicked and resorted to the logic that if the Pope “really thought about it,” the time he saved using K-Cups allowed him to help the environment in more effective ways. “I don’t want to hear it anymore,” replied the Pope. “The K-Cups stop today.”

In a final passive-aggressive Hail Mary, God asked what he should do with the half box of K-Cups he had left. The Pope conceded. “Fine. Use up the last box, but no reorders in the weekly Staples delivery. Capeesh?”

At that point, God knew there was no point in arguing, but expressed his resentment towards the new policy. “Am I supposed to become one of those pour-over hipster types now? He better not think I’m grinding my own coffee. That’s where I draw the line.”