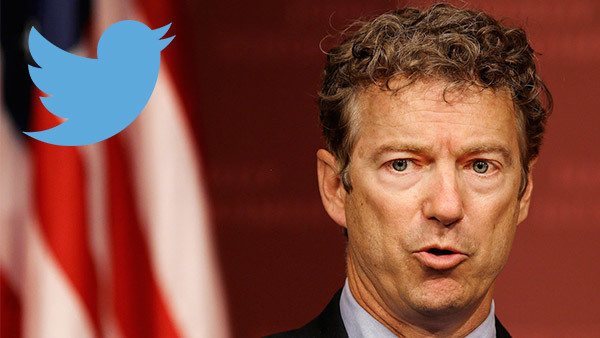 Mere hours after announcing his plans to run for president, Rand Paul is already coming under fire for old tweets in which he expressed politically correct opinions. The controversial tweets contained diplomatic comments on the gender pay gap, police discrimination, and even a sincere birthday wish for President Barack Obama.

While his Twitter feed contains thousands of examples of self-serving ignorance, this handful of “progressive” statements have many Republicans doubting his ability to serve as president. “I don’t care if it was just a few tweets—the fact that he was ever capable of respecting non-white Christian males makes me doubt his credentials,” said Gov. Scott Walker of Wisconsin. “Do we really want a leader who considers the needs of others?”

Other politicians argue that social media is a sacred place where they can test stances on key voter demographics before committing, often deciding to manipulate people in a different way if an idea isn’t well-received. “If a politician can’t say one opinion, then completely change it depending on its likeliness of winning him votes, then this isn’t politics anymore,” said Gov. Chris Christie of New Jersey.

“My political views can’t be boiled down to a few reasonable, open-minded statements. They’re not representative of my character, nor my evolution as a politician.”

Meanwhile, the Tea Party has come to the defense of Paul:

“Like many politicians, Rand Paul flip-flops; he panders to whichever voter groups are politically advantageous, then throws them under the bus if needed. To judge him or his policies based on a few reasonable statements is unfair. Rand is a duplicitous politician with a bright future in the White House.”

Interested in the scandals of other 2016 presidential contenders? Check out Hillary Clinton Personal Email Flagged Benghazi Alert As Spam.