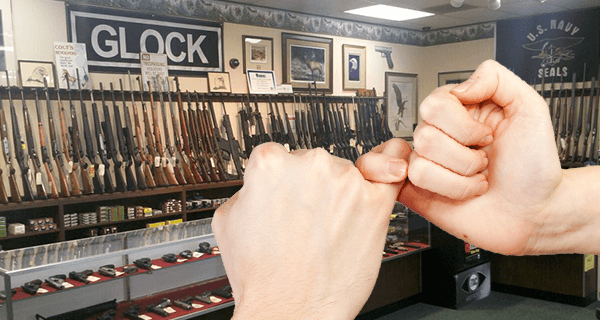 The tragic Virginia shooting of two journalists by their colleague Bryce Williams, who also took his own life, has reignited the national debate about gun control laws, causing many to reflect on whether state-mandated background pinky swears provide enough insight into a customer’s mental health.

A recent study shows that 43% percent of gun store are selling firearms to people without making them pinky swear that they’re not mentally unhinged enough to kill anyone. Even fewer—a mere 11%— take the extra precaution of asking them to swear on their mother’s grave that they definitely won’t kill anyone.

“Whoever sold Bryce Williams that gun clearly didn’t make him pinky swear,” said Second Amendment activist John Turnbull. “But the truth is that the majority of gun owners told the truth when they were asked to pinky swear.”

Despite increasing evidence that pinky swears don’t guarantee enough about the mental stability of a person, many gun advocates argue that it’s a matter of retailers trusting their guts more.

“If you got a good head on your shoulders, a pinky swear is all the information you need to decide if someone’s fit to own a gun,” said NRA board member Scott Bradley. “You just got to look them straight in the eyes and trust your instincts. If they’re sane enough to at least lie about their well-being, you’ll know.”