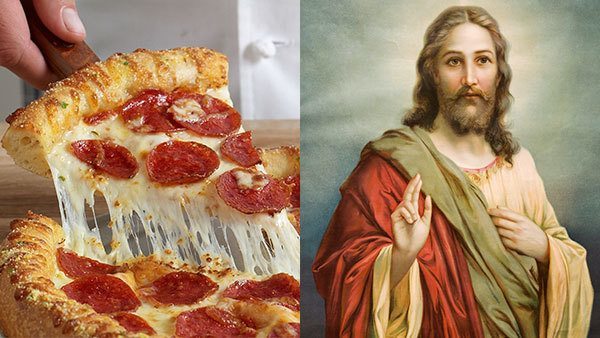 The Indiana pizzeria that declared it would deny service to gays and lesbians has turned away its first customer under the religious protection act; however, the patron an employee described as “a queer-looking fag” happened to be Jesus Christ himself.

In response to the religious freedom law, the Son of God had decided he was long overdue for his second coming. After descending from the heavens at 2PM yesterday afternoon, he entered Memories Pizzeria. “I was starving, so I just wanted to grab a slice real quick at the first place I saw. Definitely not my first choice, but after reincarnation, you’re willing to eat anything.”

Christ allegedly entered the store, walked up to the counter, and ordered three slices of the meat lover’s pizza. “I’m normally a veggie guy, but the meat lover’s was the only thing that looked remotely edible.” He shuddered. “I know Indiana’s not known for their pizza, but broccoli on Hawaiian? Come on.”

As he was about to put in his drink order, employee Crystal O’Connor told him, “We don’t serve homosexuals.” The Lord attempted to explain he was the Great Shepherd brought again from the dead, but she interrupted him again. “I don’t care who you are. God hates fags.”

When asked how she came to this conclusion, O’Connor claimed she could tell just by looking at him.

“I didn’t even bother to educate her on tolerance, because it would’ve been pointless,” Christ told reporters. “It’s just like, please let me pay for your crappy pizza so I can back to the final and eternal judgment.”

Even after major backlash, the family-owned pizzeria stands by its actions. “We are a Christian establishment,” said Crystal’s father, Kevin O’Connor. “It’s our right to turn away anyone who threatens those values.”

As Christ was unable to feed himself anywhere in Indiana, he gave up and postponed the second coming to a later date.

For more on the food industry choosing the wrong side of politics, check out Starbucks Barista Replaces Ferguson Police Chief.