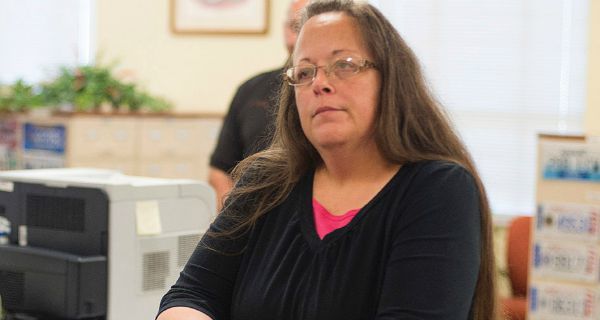 Rowan County clerk Kim Davis, who has repeatedly defied court orders to issue marriage licenses to same-sex couples, arrived this morning at a federal courthouse for a contempt of court hearing. Throughout the case, Davis has consistently maintained that “God’s authority” excuses her from recognizing 97% of his teachings in the bible.

“I know Jesus was big on ‘love thy neighbor’ and ‘bear no grudges,’ but as His follower, it’s my duty to completely ignore those things. The law cannot force me to live by the 10 Commandments, all of which I’ve dedicated my life to willfully forgetting.”

In court papers, Davis argued that she is unable to issue same-sex marriage licenses because it would “irreparably and irreversibly violate my pact with God to reject the overwhelming majority of His wishes.”

Davis has been divorced three times, causing many to point out the hypocrisy behind her actions. However, she says she’s a different person now.

“Before I was a Christian, I committed sins by mistake,” she said. “Now that I’m reborn, I’m dedicated committing them on purpose.”

While Ms. Davis is the most public example of a clerk defying the Supreme Court same-sex marriage ruling, many others have refused to issue marriage licenses.

“I’ve also arbitrarily chosen to rigidly adhere to the ‘If a man lies with a male’ line,” said an Alabama county clerk. “And like many of my peers, I also believe that abortion is evil, which brings me up to following 3% of the Bible. The government has no right to force us to adhere to the remaining 97% of Jesus’ teachings.”