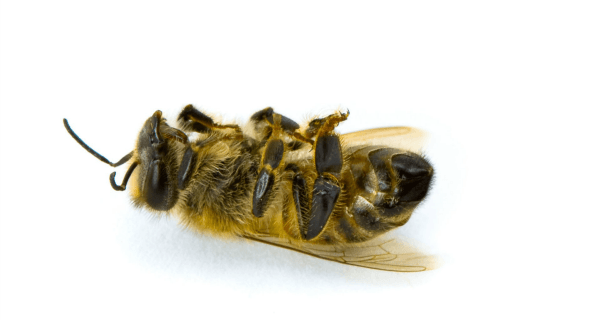 Pictured: A lame-ass honeybee dead from God knows what. Again.

The world’s honeybees are, once again, in danger of extinction, according to recent statements released by the U.S. Department of Agriculture. The threat to their existence has most recently been attributed to Varroa mites, small insects that invade bee colonies, killing their weak, pussy asses off by the millions.

The Varroa mites, which measure about 1mm, attach themselves to the abdomens of worker bees before re-entry to the home colony. Once inside, they begin laying eggs, potentially wiping out entire colonies upon birth.

“It’s fucking pathetic,” states Indiana beekeeper Frank Meier. “I mean, I understand that nature kind of has its way adapting and evolving as needed, but you have a giant poisonous stinger attached to your body man, come on!” he says.

Despite being highly feared by almost every single person on the face of the Earth, human intervention was needed, again, to protect these bees from a species of insect smaller than the degree to which any of us care about bees.

“We figured out a way to get some of them to bite the mite’s legs off,” says Conservation Biologist Nisha Patel. “It was either that or double-sided sticky tape, but we wanted to leave the bees with some sense of dignity, if that’s even possible at this point.”

Between slews of beekeepers, entomologists, agriculturalists, melittologists, and high school science fair nerds, countless hours have been spent working to return these fuck-up bitch-assed bees to the feared and respected pests they once were.

“I mean, these mites, if I had to describe them, the words ‘pathetic’ ‘totally unintimidating’ and ‘super, super lame’ come to mind, so it’s really feeling more like one of those ‘you can’t help someone who isn’t ready to help themselves’ types of situations, you know?” Patel says. “It’s really hard to convince people how important bees are when they’re constantly committing what amounts to a pathetic mass suicide every few months.”

The majority of the mentally and physically superior human species feels as if the honeybees have taken advantage of our kindness for far too long. “I’ve had it with those things,” states Chelsea Hines, of Hammond, Louisiana. “They hover around PB&J sandwiches terrorizing children all summer, but apparently they’re ‘holding the very fabric of our tenuous and complex ecosystem together.’ And yet they can’t even manage to keep themselves alive for more than a year at a time? It’s totally piteous.”

When asked how he feels about the most recent threat facing the bee population, a neighboring wasp simply spit out his coffee laughing at the mere mention of the word “honeybee.”