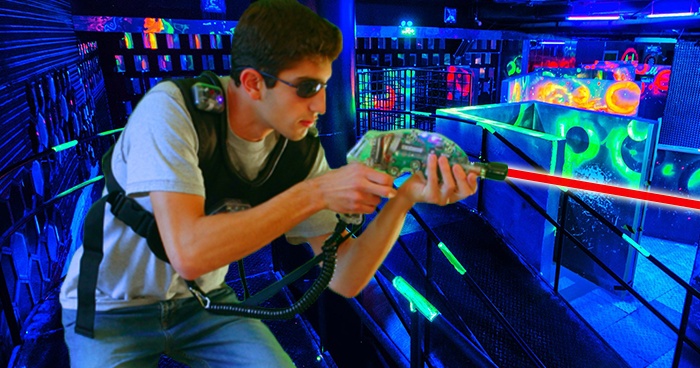 Customers and staff at the Quantum Combat Laser Tag facility in Phoenix, Arizona, experienced an afternoon fraught with tension this past Sunday, when local loner Owen Kirschner played nearly five hours worth of Laser Tag by himself. Witnesses report Kirschner never once smiled or spoke with any other players, leading them to believe that the nineteen-year-old Papa John’s delivery driver was doing a dry run for something horrific.

“I first noticed him out in the parking lot when I went outside on my smoke break,” said staff member Rich Vilona. “I see this guy in an old Honda, parked. He’s got his head rested calmly on the steering wheel with Slayer’s ‘Seasons in the Abyss’ cranked all the way up. So yeah, I was on Orange Alert, we’ll say.”

According to Vilona, the warning signs didn’t stop there.”He comes in, slaps forty bucks on the table and says ‘I’m here to make a statement.’ So right there, creepy. I tell him we can get him into the game after next because there’s a private party using the arena for the next hour,” recounted Vilona.

“He closes his eyes, does this slow exhale and says ‘I suppose we’ll just prolong the inevitable, then.’ Then he sits in the waiting area and pulls out a copy of ‘The Catcher in the Rye’ from his backpack. Dude, more red flags than China, I’m telling you.”

Nearly all the players in the six half-hour games Kirschner was involved in report seeing a stringy haired, frail Caucasian youth with a stone face and blank eyes.

According to witnesses, he never spoke a word to anyone, with the exception of seven year old Marisa Gonzalez. After scoring a ten point hit on her nearby father, Kirschner pointed his laser gun at her and said through gritted teeth, “Run. Tell them what you saw here.”

Gonzalez and her father then scored a combined total of 380 points on a visibly frustrated Kirschner. The brooding misfit was seen afterwards in his car, writing furiously in his notebook and tearing out several pages before beginning another round of the game with a cold, renewed sense of focus.

“He was really upsetting a lot of the parents,” said manager Dan Herlihy. “But what was I supposed to do? I wasn’t going anywhere near that ticking time bomb.”

“The way I see it, we’re safe over here,” Herlihy added. “It’s unlikely that whatever thing he’s preparing for starts and ends in this Laser Tag Arena. And hey, I can avoid going to any local malls or movie theaters for a while, until I think the coast is clear. Or until he goes off somewhere that I’m not. Whichever. Doesn’t matter.”

A majority of witnesses echoed these sentiments, telling reporters that it was best not to get involved, and just hope that they as individuals didn’t piss him off enough to end up named somewhere in his leather-bound notebook.

“We got bigger things to worry about in this world anyway,” one witness told reporters. “Like ISIS, all those Muslims who want to kill us, you know, shit like that.”