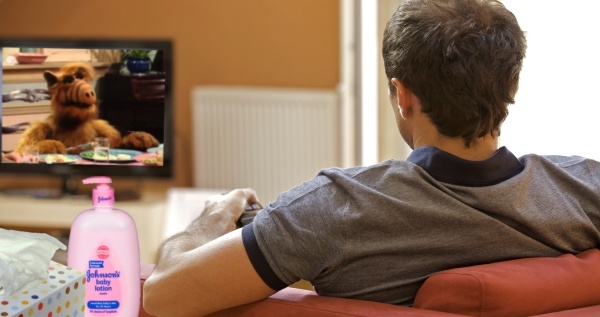 “I was smoking a bowl and watching reruns of ALF on TV Land,” explains Schwartz, “And I kept laughing whenever someone said the dad’s name – Willie – because, you know, Willie is another word for your dick. That made me think about my dick and I decided to try and jerk off while watching ALF.”

Unfortunately, ALF – the ‘80s sitcom about a wise-cracking alien who causes mischief while living with a suburban family – isn’t exactly renowned for its sex appeal. According to Schwartz, it wasn’t an easy task, and the 32-year-old almost gave up several times.

“It was actually really hard, or rather it wasn’t hard, I don’t know. I had some false starts and one time I almost came but at the same moment ALF yelled ‘I kill me!’ and my boner just kind of like, imploded on itself.”

Jay first tried to focus on Willie’s wife, Kate, but had a hard time sustaining an erection thanks to the actress’ hairstyle.

Schwartz persevered, however, and eventually succeeded in reaching orgasm, despite staring at a three-foot tall fur-covered puppet while doing so.

“I just kept tugging,” said Schwartz, “Even when my wrist cramped up and I started to go soft, I didn’t give up until I had a gym sock full of spunk and tears.”

“This was definitely the most work I’ve ever had to put in to nut,” Continued Schwartz. “I must have used close to a whole bottle of hand lotion and my dick is probably going to smell like lavender for a month but I finished and that’s all that counts.”

Completing the act made Schwartz feel both degraded and triumphant at the same time, a combination of emotions he had never experienced before that night.