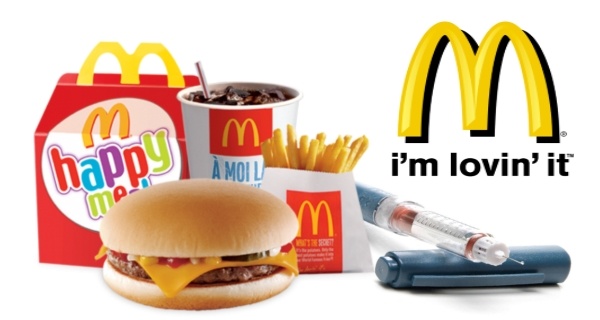 After countless failed attempts to disguise their children’s offerings as “healthy”, McDonald’s has finally decided to just embrace the artery-clogging, blood sugar-spiking nature of their food by replacing Happy Meal toys with insulin.

McDonald’s decision comes soon after the fast food juggernaut had to recall 29 million “Step-it!” fitness trackers, their most recent attempt to make Happy Meals appear more health conscious after some customers reported that wearing them caused burns on their wrists.

“The fitness trackers were a clusterfuck,” admits McDonald’s CEO Steve Easterbrook. “I saw a picture of one kid’s arm after he took the band off, and all I can say is I won’t be walking past any ground hamburger at the supermarket for a while without throwing up in my mouth.”

“After that” continued Easterbrook, “we just said ‘fuck it!’ and decided to give up on all the hippie-dippie granola shit altogether and to just start putting insulin pens in our Happy Meals. We know a couple of bruised apple pieces and a wristband made of steel wool ain’t gonna fool anyone, so we might as well embrace it, and what better way to do that than to prepare our customers for the Type 2 Diabetes that they’ll eventually get?”

Some parents, like Ohio mother Catherine McNaughton, aren’t happy about the change and are taking to social media to complain.

“These changes are getting ridiculous!” McNaughton commented yesterday on McDonald’s Facebook page. “First, we had to choose between apple slices and fries, now we have to choose between Novolog® and Levemir®? I shouldn’t have to navigate a Choose-Your-Own-Adventure novel every time I go through the McDonald’s drive-thru!”

Most of the feedback over the new Happy Meals, however, has been positive.

“I think it’s a wonderful idea.” said mother of two, Beatrice Applebaum, “I take my boys to McDonalds at least three nights a week and I used to feel bad when Wendall – my youngest – would finish his Happy Meal and immediately complain about blurred vision and heart palpitations. But now that McDonald’s is including insulin in their Happy Meals, I can just jab little Wendall in the tum after he slurps down his last McNugget.”

After the success of the new insulin Happy Meals, McDonald’s is considering including putting more medicine into various menu items.

“So far, insulin has been a big hit.” beamed Easterbrook, “It’s doing so well that we’re thinking about putting nitroglycerin tablets in the McRib next or maybe beta blockers in the Quarter Pounders.”