Are You Living Above Your Means On Neko Atsume? 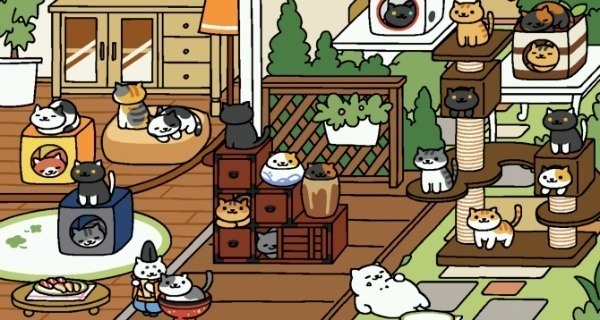 Neko Atsume is a popular iPhone game where you can care for tiny adorable animated cats in your very own virtual backyard. Given that the Neko Atsume fanbase is comprised largely of millennials, it makes one wonder how an irresponsible group of whiny grown up baby adult people could possibly be equipped to care for a yard full of digital kitties. Do you spend real live money on Candy Crush Saga? Do you view your Chase Bank overdraft fee as more of a suggestion than a warning? If so, I’m here to pose the question: are you living above your means on Neko Atsume?

Think of me as the Suze Orman of Neko Atsume- a harsh and irritating voice screaming in your ear every time you think it is a good idea to buy say, a “Pickling Pot” for 18 gold fish, or even worse, a “Marble Pad” for 30. The idea that a cat would even enjoy a “marble pad” is ridiculous in and of itself. Here’s how to get a grip on this thing.

2)   Cater to the 1%.
How cute is Bandit? And Pickles? And little Ginger? It doesn’t matter. They don’t matter. You know who matters? The rare cats with the twee pun-based names. They give you the most fish, and you chose to live in a cat-pitalistic (not sorry) society where puns and fish are the bedrock of the entire economic system.

Try to lure Guy Furry, a cat named for celebrity Chef Guy Fieri, into your yard. Joe DeMeowgio isn’t going to show up for nothing – what do you think this is, a Bar Mitzvah? If you play the game right, you might even get a visit from Chairman Meow, named after Mao Zedong, who reportedly killed 42 million people! Like it or not, these abominable caricatures of notorious people are going to be your key to getting the most fish. They put the Binto Bits on the table.

3)   Whatever You Do, Don’t Buy These Stupid Items.

-Watermelon Ball. DUMB.
-Pillow (Yellow). STUPID.
-Cushion (Beige). UGLY.
-Cushion (Brown). ALSO UGLY.
-Cushion (Yellow). PEE COLOR.
-Thick Cooling Pad. I HATE THE WORD THICK.
-Basket Case. THIS SHOULD ONLY BE USED AS A WAY TO INSULT YOUR AUNT WHO POSTS POLITICAL MEMES ON FACEBOOK.
-Warm Sock. GROSS. WHY IS IT WARM?
-Tail-thing Teaser. SELF AWARE OF HOW STUPID IT IS.
-Wood Pail. WTF?

Your call, but in my opinion these items are a waste of your hard earned fish. If you have these stupid items in your goodies, you are living way above your means in Neko Atsume.

4)   Remember, Mementos are Insults.
How cute!  Gozer brought you a cicada skin! NEWS FLASH, a cat bringing you dead bug skin is not a compliment. That cat knows you are poor and is mocking you. It brings you literal garbage that belongs in a trash can, eats your Sashimi, laughs in your face, rubs its asterisk-shaped asshole on your Silk Crepe Pillow and goes to sleep. Unfortunately, there is nothing you can do to stop a cat from bringing you a memento. Just remember its stupid smiling face the next time you want to buy it a cube to sit in or an urn to sleep in or whatever.

Are you collecting all the food themed items? All red furniture? Remember those people who refused to hang their children’s toilet roll christmas ornaments on the Christmas tree so they could keep it all within that season’s Grandin Road color profile? You’re that person, but in a smartphone game about cats.

I’m sure that Sakuramochi cushion will be great to dry your tears with when you can’t afford to send your cats to college. Sure, you may be saying “But there is no college in Neko Atsume.” And I say to you: not yet. But what if they happen to make an extension of the game and there happens to be a college and you happen to not have 80k in fish and interest to pay for it and your cat happens to not be equipped to join a rapidly evolving work force? All hypotheticals, of course, but that’s why they pay me the Gold Fish.

I don’t mean to be harsh, but living above your means in Neko Atsume is the number one cause of being poor in Neko Atsume. We all dream of lavish dinners of Ritzy bits while lounging in a cat metropolis in our tastefully decorated Zen garden, but maybe you should renovate your fish spending habits before renovating your yard. You think being financially responsible sucks the fun out of this cute and mindless game? NEWSFLASH: It is 2016 and nothing is fun. No one should play Neko Atsume for 40 hours a week and still live in poverty. And if you ARE playing Neko Atsume for 40 hours a week, please – put down your phone and go outside.