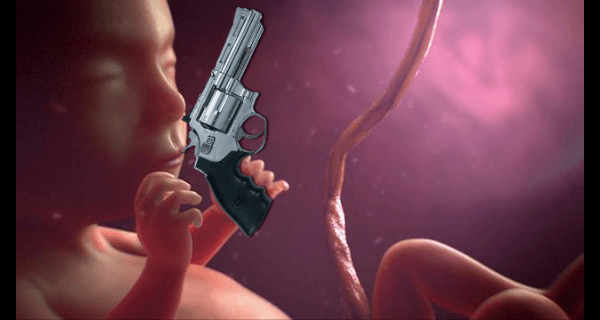 In the wake of heated national debates surrounding Planned Parenthood and Second Amendment rights, the National Rifle Association has announced a new project that they believe will protect both unborn fetuses as well as American citizens’ rights to guns. The group says it’s funding research that, if successful, would lead to new nanotechnology capable of implanting firearms into pregnant women’s wombs.

“If we could just get tiny little guns into those tiny little hands, doctors would think twice about performing abortions. A Magnum with an inch-long barrel is still a Magnum. It’ll take your head plumb off,” said Wayne LaPierre, executive vice president of the NRA. “The second amendment applies to all Americans, even in utero. Unless they’re black, obviously.”

The NRA says that scientists have successfully implanted a 9MM handgun into the uterus of a pregnant chimpanzee. If all goes as planned, human trials will begin early next year.

When asked if arming unborn children would lead to the doctors themselves carrying guns, LaPierre smiled. “Gosh, we sure hope so. Everyone should be packing heat. And not just on the maternity ward—this could be a huge step in the fight against cancer. Everyone knows, the best way to stop a single-cell organism with a gun, is a multi-cellular organism with a gun.”

Fetal gun ownership would pose a health risk to expecting mothers, but the NRA says their research proves that massive internal trauma would be a minimal issue when set against the unborn child’s unfettered ability to defend itself. Additionally, mothers would not be allowed to own guns during pregnancy as “hormones and other girl stuff totally mess with their ability to use a gun properly.”

When pressed about what steps would be covered in prenatal background checks, a spokesperson for the NRA said that under new proposed regulations, the fetuses would be automatically approved for gun ownership. “As far as we’re concerned, there’s no cleaner record than a human being that hasn’t entered the world yet.”