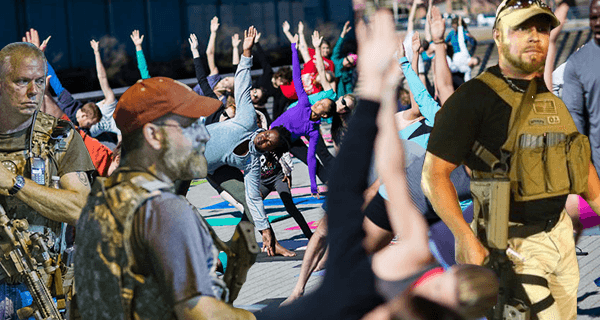 On Monday evening, a handful of heavily armed white men arrived in Ferguson, Missouri, unsettling protesters and confusing some police. However, the group, who call themselves the Oath Keepers, surprised the local community when they started passing out flyers for a yoga class later that night.

“We’re here to protect the weak,” said Oath Keeper Randy Blodgett, “and the best way achieve strength is through a holistic approach, combining breath, spiritual intention, and movement. As a certified yogi, it’s my honor to use my divine gifts and military-grade firearms to help unite all the beautiful souls I’ve been blessed with meeting today.”

Thousands of protesters and police alike participated in 90 minutes of restorative movement, breathing, and meditation.

“Wow, yoga really does help everything,” exclaimed one officer. A nearby protester enthusiastically concurred, asking the cop if he was planning on going to the midnight Anusara class. They agreed to go grab an iced tea afterwards.

After witnessing a heated exchange between a couple protesters and a cop, another Oath Keeper Stu Granberry invited the three to join him in Child’s Pose, which quickly defused tension. Afterwards, he invited them to stop by his Power Vinyasa Flow class the following morning at 6:30 AM for a few “invigorating sun salutations.”

However, the Oath Keepers’ informal uniform of guns and bulletproof vests has caused some protesters to question their intentions, but the group of gun-wielding Caucasian men maintain that their militaristic adornments are beside the point.

“Just because I sport full-body camo and an assault rifle,” said Blodgett, “doesn’t mean I’m incapable of maintaining steady ujjayi breathing for 60 minutes or performing an Adho Mukha Svanasana—which you might know as Downward-Facing Dog.”

“We do not obey the government,” Granberry added, “but we do obey the infinite wonder of the present moment.”