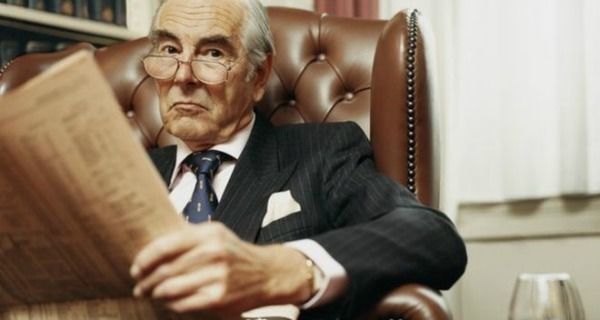 Pictured: The old man. “Where did the time go?” He wondered. “What is time, really?”

“Hmmmm,” the man could be heard muttering, as he took a puff on his long, fragrant cigar. “I liked things fine just the way they were,” he continued, to no one in particular, as he reminisced about the early years: the years when men could be men, America was on top, and he and his buddies from business school felt like the world was truly their oyster.

“Hmmmm,” he could be heard hmmming again, as he gingerly placed his gnarled, shaking hand on the edge of his polished mantlepiece, fondly remembering the days when he could drink during the day and slap his secretary on the tush. “Something’s not right.”

He sat down for a while, poring over his week’s agenda, full of new-age terms he didn’t fully understand, like “sexual harassment meeting,” “social media department”, and “audit, Thursday 9am.”

“This doesn’t bode well for me,” he spoke aloud to an authentic traditional Cherokee dance mask adorning the wall, missing the days when having a conversation with it guaranteed him a few laughs. “Even the Negros don’t like me!” he would make it exclaim, and his associates would guffaw harder than they did when their wives asked to borrow their cars. But no more. Somehow, everything had changed around him.

And where were the Old Boys now? Bishop was dead of course, cut down in his prime by a heart attack. Roman was on an island, wouldn’t say where, to be certain, but the yearly postcards made it look warm. Thomas, the old rogue, had had his soul put inside a robot so he could live forever. “But at what cost?” the man found himself thinking for the first time. “At what cost?”

Opening his most prized possession – a snuff box stolen from the Russian Tea Room back in ’54 – he remembered what it felt like to own books, and never read them. Back when he could spend days staring at his leather-bound encyclopedia set, but never going near it. These days, the kids were all reading on their phones. He didn’t like that much at all, he decided.

“Where did the years go?” he pondered, as he looked back at the oil painting behind his desk and really felt he was seeing it for the first time. What did it mean to “own” “art”? Was was “art?” What was “own?” More importantly, where was that Oriental masseuse he liked so much back in 1961?

Yes, something in the world had definitely gone awry somewhere along the way. But where, and at whose feet to lay the blame? He sat down on his favorite chair, the redwood. Oh, the questions. The questions made him tired.