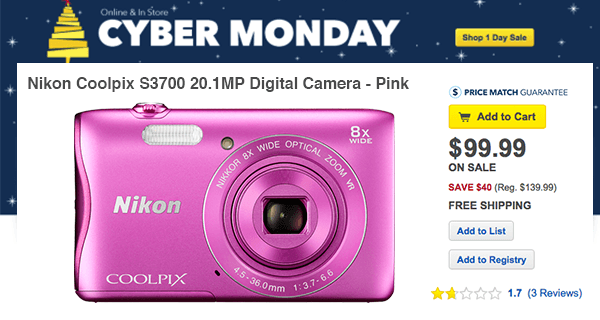 The holiday season can be hard for everyone, but I’d challenge anyone who thinks they’ve been feeling “down” to imagine you’re me: a Pink Nikon Coolpix S3700 on BestBuy.com right now.

Or Target. Or Kmart. Whatever. Doesn’t fucking matter.

Now picture that you’re on sale for 40% off for the eleventh year in a row, knowing it’ll still take an additional 30% clearance sale before a grandma in Indianapolis bookmarks you by accident after being tricked by a banner ad on consumerreports.org.

Before you patronizingly ask, “Is it really that bad? At least you’re not a Blackberry Storm!” let’s cut the bullshit and admit that yes, I’m 100% the flaming shitbrick of electronics. Sure, I’m a shiny, pink shitbrick, but a shitbrick nonetheless.

If you think I’m being dramatic, just ask the pair of discontinued “Rasta” Skullcandy earbuds I’ve been hanging out with lately. He is solidly on the cusp of obsolescence, and even he tells me I’m a useless waste of space. And you know what? I appreciate his honesty.

We both know you’re not buying me, so at least give me the dignity of calling me what I am: a chintzy piece of garbage you’d only buy if you were backpacking through Singapore, lost your phone, and then found a man selling me illegally for $20 (who you immediately haggled down to $12).

I long for the days of yore: to hear the shrill whine of a fax machine, or the tacky ringtone of a Motorola Razr. I just found out this week that Zune is still a thing, and openly wept into my “portrait setting” button hole.

Before you start to placate me—I do not need your sympathy, by the way—I just wanted you to ask you this: can you honestly say you’ve ever gone so far as to add me to your shopping cart? And no “If it’s before 2008” or “Maybe for my niece” loopholes, please. I’m talking about the year 2015 me when your Verizon plan is offering you a 99¢ upgrade to the iPhone 5S.

What kills me is that some people think I like being shoved in their faces. They think I want the attention. But that really couldn’t be further from the truth. You know, I never thought I’d say this, but I rue the day Ashton Kutcher signed that endorsement deal in 2008. That was the saturation point, the beginning of the end.

It’s especially hard when your old friends just disappear. Like the Palm Treo. She got it. She used to tell me, “Listen. You’re hot shit right now. Everyone loves you. But one day you’ll wake up on the bathroom floor of a Panera Bread or in the back of somebody’s kitchen junk drawer next to a keychain flashlight, and you’ll miss the days of being an anonymous pile of plastic in a dilapidated Chinese factory.”

I miss those days.

I miss those days.