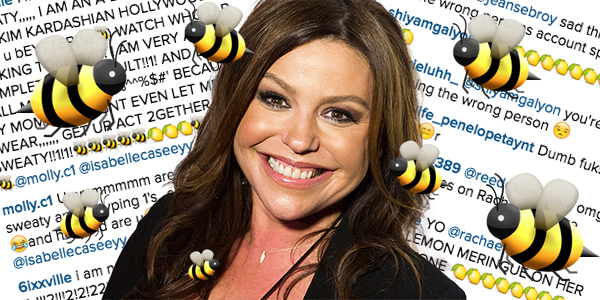 No hard feelings from television food personality Rachael Ray after a case of mistaken identity led to legions of Beyoncé fans expelling a venomous tirade of hate in the comments section of the celebrity chef’s Instagram.

Commented Ray from behind a smile/grimace of gleaming teeth, “I would endure a hundred thousand deadly torments for one just one more moment in the spotlight.”

The confusion, which arose after lyrics in Beyoncé’s new album Lemonade gave weight to rumors of Jay Z’s infidelity with fashion designer Rachel Roy, resulted in hundreds of confused commenters accusing, threatening and abusing the celebrity chef on her own social media, an experience which Ray claims she, “loved” and “dearly, dearly misses.”

“It was all worth it,” insisted Ray, “You can’t imagine. The idea that that many people were capable of thinking about me at once, it boggles the mind. Sometimes it feels as if YUM-O never happened.”

The famously quirky chef, who once admitted she occasionally screams just to remind herself that she exists, has most recently been focusing her efforts on marketing Nutrish, her line of dog food; but when asked about it, she spat on the ground, her expression darkening.

“That is nothing to me now,” she breathed, before straightening, once more grinning from ear to ear.

“Who can blame them?” queried Ray when asked if she blamed fans for not reading carefully. “I mean the names are just so similar. And I don’t know if you noticed but, this hair? Most would describe it as good. In fact one of my old boyfriends used to call me Becky. What are the odds? It almost seems too coincidental. Wouldn’t you say?”

When asked if she herself was now alluding to having cheated with Jay Z, Ray giggled in her trademark rasp, “No, I’m not!…Or am I? …Could you leak that?”