Police Not Buying Story About Rescuing iPhone From Hot Car 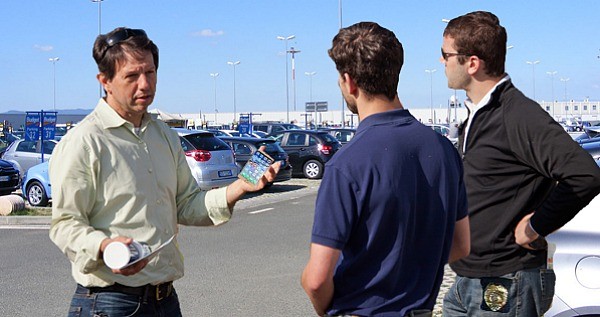 A man accused of shattering a car window with a rock in order to steal a brand new iPhone 7 claims that he was only rescuing the smartphone from a slow death in a “sweltering deathtrap” and that theft was never his intent.

New Hampshire resident Robert Turner was walking through the parking lot of the Seabrook Walmart yesterday when he heard what he described as an “electronic call for help” coming from a nearby BMW.

“I was walking into Wally World to return a shirt that didn’t fit when I heard a ringing, but kinda distressed, like the poor little guy was in pain,” Turner explained. “I went over to investigate and found a brand new iPhone 7 just sitting on the front seat of this red BMW — no AC, windows up — just roasting in the direct sunlight!”

Turner went on to cite several unconfirmed reports of mobile devices being left to die upon being neglected in hot cars.

“People would rather let their devices overheat then crack a goddamn window,” he said. “Why? It’s not like someone’s gonna buy a slim jim on eBay for $7.48 and then skulk outside of busy shopping centers just waiting for some distracted consumer to leave their high-end electronics behind in an unattended vehicle. That’s just absurd!”

Turner claims he then picked up a nearby rock and started swinging it at the driver’s side window in an attempt to save the helpless iPhone.

“I wasn’t thinking at all about my own safety,” Turner admitted. “I just started bashing the window like a madman trying to get to that poor iPhone before the owner came ba — before its internal circuits started to melt. The feeling I get knowing that I was able to snatch, I mean, liberate an $800 piece of luxury technology is worth whatever cosmetic damage my hand may have suffered.”

Local police, however, reported that eyewitnesses at the scene paint a much different picture of what happened.

“We have several witnesses who overheard Mr. Turner excitedly yelling, ‘Is that a brand new iPhone 7 in that beemer?’ and ‘Looks like someone ordered the ol’ winder smashin’ special’, before bashing the window with a giant rock,” said Officer Dan Scrimshaw of the Seabrook PD.

Additional witnesses, alerted by the sound of broken glass and a blaring car alarm, confirmed seeing Turner gingerly step around the glass shards at his feet and reach into the car, where he carefully removed the iPhone before retrieving a Macbook, a Nintendo 3DS, and a pair of Beats headphones from the back seat.

“I heard him whistling that Jane’s Addiction song ‘Been Caught Stealing’ too,” said eyewitness Carla Criss. “What an asshole.”

Despite what the police are calling “obviously damning evidence that this man was 100% committing a crime for his own gains”, Turner vehemently insists that his actions were motivated by concern for the well-being of the abandoned smartphone and nothing more.

“I’m sorry, but if I see a piece of expensive, high-end gadgetry sitting alone in a car on a hot day, I have a moral obligation to mask my fingerprints with clear nail polish, smash the driver’s side window, slash the car’s tires so that I have that much more of a head start before the owner can get to a police station, deter any witnesses from ratting me out through intimidation, and then rescue the poor electronic device,” he said. “If that’s a crime then so be it.”