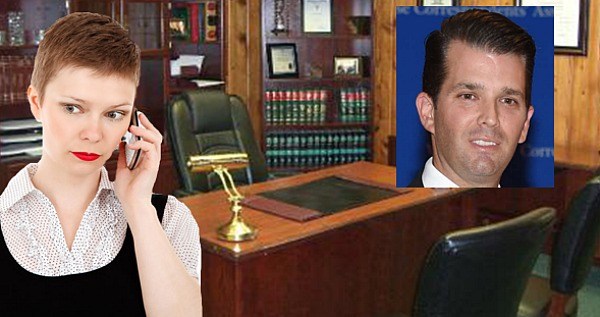 “She had one job and she blew it,” he explained to reporters. “How could she possibly think we wanted to talk to Donald Trump Junior?”

A source close to the matter confirmed that lawyer Natalia Veselnitskaya met with Donald Trump Jr. in early June of 2016 to discuss information the Russian government had on Democratic nominee Hillary Clinton in an effort to deter her campaign. It has now come out that Veselnitskaya actually meant to meet with President Elect Donald J. Trump, and not big-game hunter and Garfield enthusiast Donald Trump Jr., his oldest son.

“It was my fault,” Veselnitskaya explained. “I should have known this was not a serious man to be talking with when he many times referred to his friends in the room as ‘Slim Jim’ and ‘Paul Many-Fart’.”

She went on to explain the oversight on her part, pointing out that, “… in Russia, we don’t name children the same as father, you have separate name,” before adding what a mistake it was to speak with “such a stupid, stupid man.”

President Trump weighed in on the breaking news in an official tweet.

“Look, he’s a good kid, but when I’m gonna collude I’m gonna do it myself,” he stated, before attempting to reason what may have happened that afternoon.

“I was waiting for her in the other room for at least an hour… I guess she got confused… I’m Donald J. Trump, he’s Don Junior. See, the letter ‘J’? It’s in both names. It’s a whole thing.”

This isn’t the first time the Kremlin has had trouble colluding correctly with the Trump Administration. It was reported that in late October of last year a 12-year-old San Jose, California boy named Derik Trump mysteriously received $137,000 in non-consecutive bills apparently meant for President Trump’s son, Eric.