My Grandpa Was an Alcoholic, You Won’t Believe How Wrong Rick & Morty Gets It 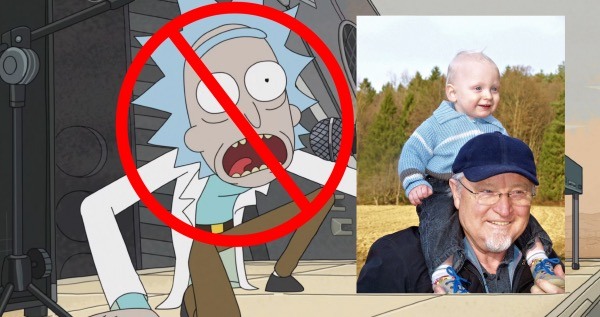 Rick and Morty has taken the animation world by storm. It’s constantly gaining new fans, never fails to make audiences laugh, and has made great leaps in bringing Adult Swim original programming more into the mainstream. While I can’t deny being occasionally entertained by the adventures of alcoholic mad scientist Rick Sanchez and the intergalactic hijinks he gets into with his grandson Morty, I must say that as the grandchild of a raging alcoholic, the show gets A LOT of stuff wrong. Because this is the internet and I have an opinion, I’m going to tell you exactly where the show doesn’t apply to me. Below I break down some defining aspects of the show that I have a problem with, and if you’ve been affected by the show like me, let us know in the comments!

1. Not all alcoholics are also geniuses.
I don’t know what Dan Harmon was thinking when he made Rick an alcoholic super genius. Is that the joke there? My grandpa, Poppy, could honestly barely read, especially when he was drunk and slurring his words. I can remember all the times he tried to help me with my homework but just ended up screaming about the “New way of doing division” not being as good as the old one, which he also couldn’t remember.

2. Rick’s relationship with birds was way different than Poppy’s.
Throughout the series there is a recurring character known only as ‘Birdperson’ with whom Rick has a checkered past. The audience is not told what that past is, and is left to speculate. On the other hand, growing up with Poppy around, he always made his feelings very clear about birds, even forcing me to shoot one with my BB gun at a very young age. I shouldn’t have even had that BB gun and I sure as hell wasn’t laughing when he manipulated me into committing manslaughter in second grade – again, its like Dan Harmon wasn’t even trying to make this show work on a realistic level.

3. Rick writes an intergalactically successful pop song, while Poppy definitely could not have.
In season two the titular characters are kidnapped and forced to write the perfect pop song to please an extraterrrestial being in order to save earth. While the majority of that premise is believable, there is no way Poppy, raging alcoholic that he was, could write any kind of song, even an unsuccessful one. Poppy didn’t even listen to pop music. When I was a kid, I had a Backstreet Boys CD in my discman and when Poppy overheard, he repeatedly called me a ‘fruitpicker’ – which I think is some old-timey homophobic slur – and then forced me to listen to 17 consecutive hours of frank Sinatra until I “Came out normal.” I still can’t listen to “I Want It That Way” without having PTSD flashbacks. The show would be way better if that’s how Rick reacted in that scene.

4. Poppy never took me to space, or even the mall.
Rick is always taking Morty to different universes, galaxies, etc. Poppy could barely drive. He drove me to the liquor store once, but he was drunk and when he got back my parents cried a lot and took away his license. He also wasn’t allowed to babysit me ever again. Poppy did have a telescope though, and I think he loved it more than he loved any of us. One time we saw a shooting star. It was beautiful until he started having flashbacks to Vietnam and thought I was the enemy. Worst birthday ever.

5. Poppy looks nothing like Rick.
I know cartoons don’t always have to be perfectly anatomically correct, and that is supposedly part of the fun, but Poppy was not nearly as slim as Rick. Like the comparison doesn’t work At. All. I know that no experience is universal but at the same time, why can’t the media cater specifically to me?

My ultimate goal is for Dan Harmon to see this, and change his show accordingly to better fit my experience. I’m not holding my breath though…he also shat the bed with Community, which was NOTHING like my experience spending 7 years at community college.