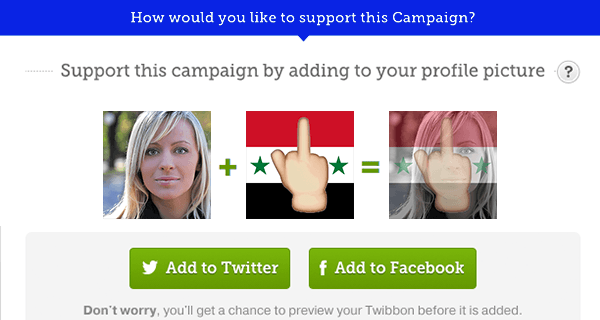 With the Syrian refugee crisis quickly rising to the forefront of American politics, 31 governors have declared their intentions to ban Syrian refugees from relocating to their home states. In the hopes of further spreading the message, the Republican National Committee has introduced a Facebook profile picture filter for those in their voter base who wish to spread their public support for xenophobic fear-mongering.

Basing their design off of the filter Facebook issued following the ISIS attacks in Paris, the RNC has designed a similar overlay. By overlapping the Syrian flag with a middle finger icon, users will be able to send a clear message to their hundreds of friends that they are bigots who are terrified of change. 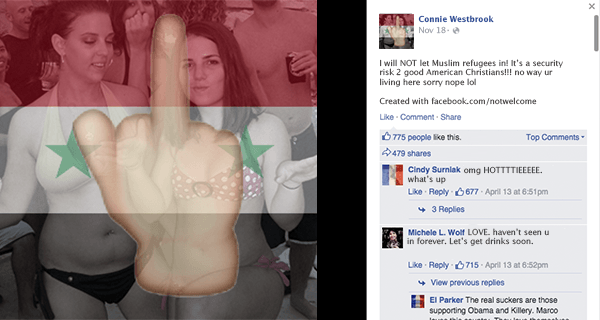 “Around the Paris attacks, I changed mine to the French flag,” says Becki Johnson, 24. “Of course that was so sad, but now I have my own problems. I might have to live with a bunch of ISIS Muslims. This new profile pic sends the message that I stand with those who will not tolerate letting these hate-filled refugees in. Especially the children…they’re particularly terrifying to me.”

Like Johnson, millions of other Americans have already changed their pictures to show support for the cause, with Facebook statuses ranging from impassioned cries of “If we knew how to screen Muslims, Barack HUSSEIN Obama wouldn’t be the president right now #smh” to “what’s this button do? lol.”

However, there has been some confusion over which country the flag represents, as this crisis comes on the heels of heated discussion regarding Mexican immigrants. Darryl Corburn, 42, a vocal Facebook user, posted on the RNC page, “Even though I have no idea what the Mexican flag looks like, I’m starting to get confused about which immigrant minority I’m supposed to hate right now.” They addressed his comments, responding, “No worries Darryl! Plenty of room at the table.”

Texas Senator Ted Cruz was one of the first presidential candidates to change his profile pictures. “I mean, gosh. I’m just so thankful there’s a way to just see all those faces with the middle finger and a Syrian flag,” said Cruz. “Even though I can’t meet with many of my constituents in person, I’m feeling the love for like-minded people who want to take a stance against allowing scary brown people to live peacefully alongside good Americans.”

“Of course, I have nothing against Christian refugees,” he added. “In fact, I encourage the millions of you that I’m sure exist to please ‘like’ my Facebook page.”