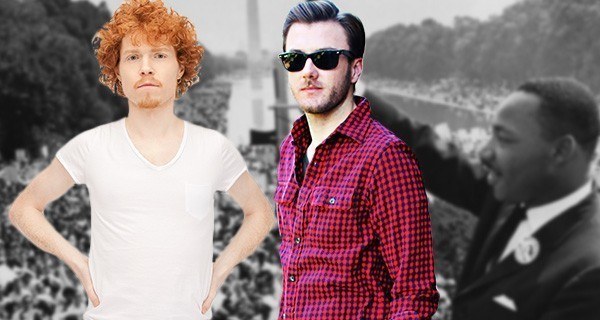 Pictured: Mike and Colin, destined to fail to observe the holiday in a meaningful way.

White college roommates Mike Endicott and Colin Doherty vowed to celebrate Martin Luther King, Jr. Day this year by educating themselves about the black experience instead of “smoking weed and playing N64 again.”

“We’ve started to realize it’s kind of messed up how we get so pumped for a day off, when actually it’s commemorating the death of one of the greatest forces of change in human history,” said Endicott. “This year we’re gonna take it seriously.”

When asked how the pair were planning to observe the national holiday, Doherty said they would “start off with a conversation about Ta-Nehisi Coates’ book Between The World And Me.” Endicott stated that they would follow the discussion with back-to-back viewings of Do The Right Thing and Malcolm X.

After the pair realized the combined run time of the movies would be over five hours, they narrowed their goal to one Spike Lee movie, an episode of The Wire, and a thorough read-through of the March On Washington Wikipedia page. Additionally, the two maintained they were completely committed to “not pissing the day away on Guitar Hero 5.”

By 2 PM however, the friends had not actualized any of their plans. “We were out really late last night and TBH, I’m just crazy hungover right now. Super grateful for the day off,” said Doherty. “We’re still gonna try to fight the good fight by watching some Family Matters reruns, but maybe put on one episode of Portlandia first, since the new season is coming out soon.”

At 7 PM, Endicott and Doherty admitted they had binge-watched an entire season of Portlandia, and spent approximately zero percent of the day enriching their knowledge of the black experience or any of the values Dr. King famously espoused.

Though the friends seem to have committed to missing the educational opportunities of this historic holiday, they remain optimistic about their plans for Veterans Day. “We’re gonna start off early with a Flags Of Our Fathers screening,” said Doherty.

At press time, the duo confirmed they had “no plans” to instead watch Harold And Kumar Go To White Castle for the third consecutive year.