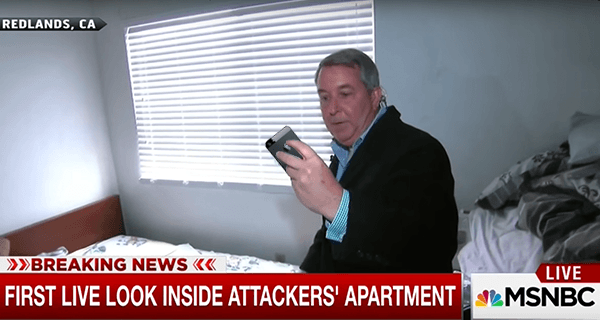 After being invited in by the landlord on Friday afternoon, journalists mobbed the townhouse previously rented by the couple suspected of the San Bernardino shooting. While most news crews vacated the premises after a few hours, however, one lone MSNBC anchor is still waiting for his Uber to pick him up this morning.

“It’ll be here in 11 minutes,” Kerry Sanders said, lying facedown on the couch. “I swear.”

The landlord Doyle Miller maintains that he had only intended it to be a casual get-together. “I was trying to be nice by inviting everyone, but I just got taken advantage of. Seriously, when is Kerry leaving? This is so not cool of him.”

Sanders had originally planned on going home with the rest of the MSNBC crew, but when he got distracted by a random stack of loose leaf paper for the second time, they decided they were better off leaving without him.

“It’s like, ‘We’re done. Can we just leave?’ We partied. We had a good time, but the scene was really thinning out, and he was still rummaging through this drawer of old birthday cards,” said an MSNBC cameraman. “I just can’t with him anymore.”

“Plus I was really craving McDonald’s,” he added.

When Sanders realized his ride had left without him, he turned to the CNN team, who avoided answering him by pointing to a used water bottle and asking if Sanders had inspected it yet.

“I know it seems mean,” said CNN anchor Stephanie Elam. “But once I got my hands all over a driver’s license and paraded it onscreen for all of America to see, there really wasn’t any point in staying any longer, so I was just like, ‘Peace.’”

The FBI, who had finished raging before the others arrived, says the apartment was “already inspected and totally dead by the time everyone else showed up.”

“We’ve learned that we just can’t handle a night of investigative partying like we used to…we really feel it the next day,” said one investigator. “Show up, and the second you feel like going, pull an Irish exit. Seriously, it’s the way to go.”

At 4 am, Sanders went back into the kitchen and dug through the fridge to find a snack.

“That pudding isn’t his!” said the landlord. “I mean, he didn’t even bring a bottle of Yellowtail or anything for the group. Who does he think he is?”

Sanders, meanwhile, came up with a seemingly endless litany of empty apologies. “I’ll be out of your hair in no time,” he said, combing through loose pay checks on a desk. “Is there an extra tooth brush I can use by any chance?”

At the time of publication, Sanders said his Uber was taking too long and had double-booked a Lyft.