BREAKING: Two Men About To Die Each Believe Other Is Skydiving Instructor 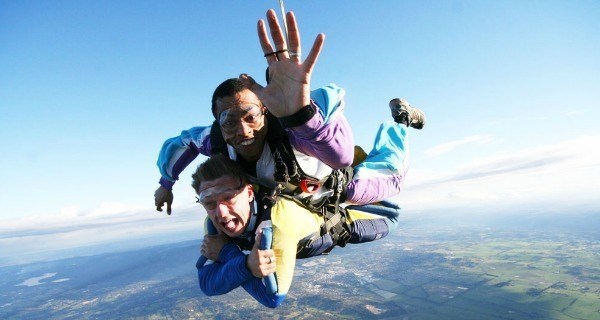 Unbeknownst to themselves, two men are living the last 90 seconds of their lives due to the fact that both believe the other is a skydiving instructor.

A devoted family man with a promising career as an archeologist, Michael Galligan, 31, has no idea that his life is about to be cut short in the most tragic of ways. As he hurtles through the air at the maximum falling velocity of 189 meters per second, he remains under the false impression that Alex Danforth, 28, is the skydiving instructor.

Tragically, Danforth believes that Galligan is the instructor.

Through an egregious clerical error, Sky’s The Limit Skydiving failed to assign an instructor to the plane the two men boarded this afternoon in Long Island, NY. Based on each other’s charisma, Danforth and Galligan both assumed that the man across from him was the instructor. The quick friends reportedly bonded for approximately 20 minutes as they boarded the plane and rode up to a cruising altitude of 12,500 feet.

Galligan, who is still mistakenly convinced that today is the best day of his life, claims to feel more free and uninhibited than he ever thought possible. “All of the ‘big’ problems just disappear when you see the world from this high up. I feel invincible. It’s amazing!” he said.

Galligan will be survived by his wife Tina and their three children, Victoria, Joseph, and newborn Benjamin, the last of whom will retain no memories of his father.

Danforth, a seventh grade teacher extremely popular with students, faculty, and administration, says he went out skydiving as part of a pact he made with one of his students.

“A few days ago, I had a heart-to-heart with a student of mine, James, whose grades had been falling,” said Danforth. “James explained that he was having some trouble at home, so I thought it might lift his spirits up if we both agreed to try something new this weekend.”

Danforth will be survived by his father, who was planning to visit Danforth next weekend and finally apologize for leaving their family abruptly two decades ago after starting an affair with his executive assistant.

UPDATE: The two men have simultaneously asked each other if it’s time to pull the parachute, but neither have responded for several seconds.