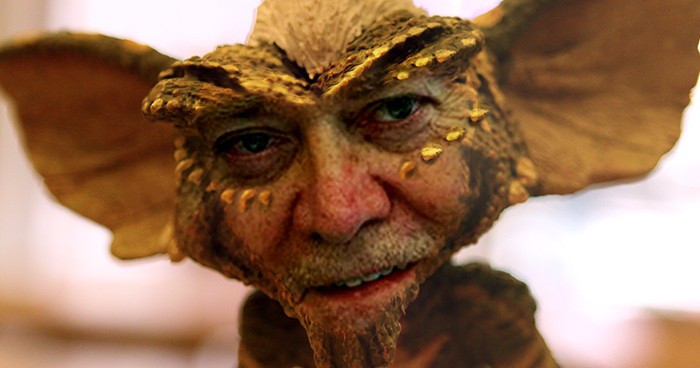 After several reports of a small creature terrorizing interns and causing appliances to malfunction all throughout the White House, the Trump administration was forced to admit earlier today that one of the kitchen staff accidentally fed chief strategist Steve Bannon after midnight.

“When Bannon was brought into the White House everyone was told the rules, don’t get him wet, no bright lights, and for the love of god, do not feed him after midnight!” said one anonymous source. “Clearly someone didn’t follow that last one because the President came into the oval office yesterday morning to find an empty cocoon under his desk and Bannon – now covered in slime and green scales – running around the room growling ‘Paul Ryan, caca!’ and painting the walls with his poop!”

“The administration is in full crisis mode,” said another source. “This…thing…is wreaking havoc on the White House. It’s breaking electronics, looking up female staffer’s skirts, drinking, smoking cigars…it’s like having Bill Clinton in the White House all over again!”

Reports say that the President is trying to pin this on kitchen workers held over from the Obama administration, but White House Executive Chef, Cristeta Comerford, denies that any of her staff are to blame for the incident.

“It wasn’t our fault,” says Comerford. “Someone purposefully set the clocks in the kitchen back an hour so that when Steve popped in last night to grab a piece of chicken at what we thought was half past eleven, none of us gave it a second thought.”

“It wasn’t until this morning when I went to get the President his usual breakfast of Pop-Tarts and a Yoo-hoo that I noticed the clocks still said 11:30 pm,” continued Comerford. “But by then it was too late; Bannon had already gone through his metamorphosis.”

Bannon even went as far as to drive a tractor through the West Wing, causing millions of dollars in property damage and maiming visiting speaker of the house Mitch Mcconnell, before he was finally subdued by a flashlight-wielding Mike Pence.

“I came around the corner and saw Bannon gnawing on a screaming Reince Priebus,” explained Pence. “I knew the little shit didn’t like bright lights so I shined my flashlight at him until he passed out from the pain.”

“It’s a good thing that I was doing one of my usual perimeter sweeps to make sure that there were no women loitering within 100ft of my office,” said the Vice President. “If I wasn’t such a chaste man, Bannon would still be running around here causing mayhem.”

In the end, sources say the old Chinese man from Breitbart that sold Bannon to the President in the first place came to the White House to take the chief strategist back.

“You are not ready for Bannon,” the man reportedly told the president before carrying Steve Bannon away in a small metal cage. “Perhaps someday you will be ready…until then, Bannon will be waiting.”