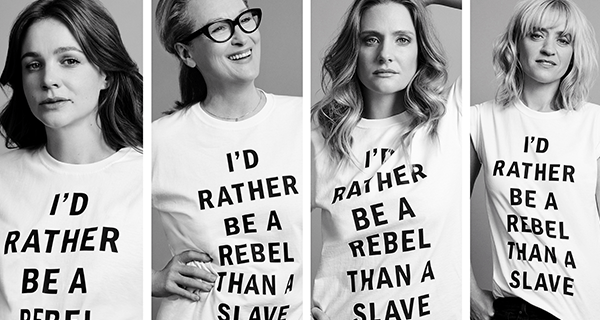 What was originally intended to be an empowering PR campaign has quickly transformed itself into a public health crisis.

Earlier this week, Meryl Streep and her three co-stars from the upcoming movie Suffragette posed for a promotional photo shoot in Time Out London, wearing t-shirts with the slogan “I’d rather be a rebel than a slave.” Unaware of the blinding levels of white feminism the campaign was about to unleash on them, hundreds of readers had already lost their vision with hours of the piece being published. Two days later, tens of thousands of patients suffering vision loss have flooded hospitals.

The public health risk has rapidly become an epidemic: not only are Time Out London readers at risk, but also the many others, possibly millions, who have clicked on the still-spawning articles and think pieces about the photo shoot. While those who quickly glanced at the images probably experienced little to no harm, readers who spent longer than five seconds staring directly at the searingly white images are at risk of losing part—and in extreme cases, all—of their eyesight.

The U.S. Department of Health and Human Services advises against looking at the photos at all, but for those who absolutely must, it strongly suggests wearing sunglasses with UV protection. They also warn that 48 hours in, little is known about potential long-term effects, so those exposed should pay close attention to any changes in their health and consult a doctor if needed.

Perhaps most tragically, the group most likely to stare for longer periods of time at the images are those already experiencing shock, pain, and horror at the dangerously high levels of white privilege inherent in likening women’s suffrage to slavery in the year 2015.

Pathé, the film’s production company, has issued the following statement:

“We are deeply sorry for any loss of sight that this campaign has caused. Slavery is a horrifying chapter of our history, but the quote on the t-shirts were taken out of context. For those whose vision has been affected, we offer our deepest apologies as well as vouchers for free admission to Suffragette.”