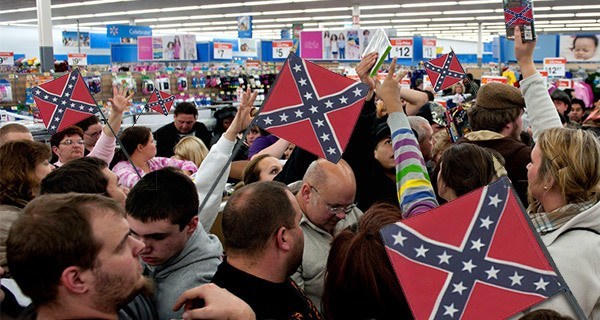 In response to the racially charged violence in South Carolina last week, Walmart has announced its decision to stop carrying merchandise bearing the Confederate flag. To both clean out remaining stock and give customers one last chance to reap savings on Southern heritage gear, the retail giant is holding a Confederate Flag Blowout Clearance Sale through Sunday.

When asked what led to the decision, a Walmart spokesperson said, “We made a buttload of money after voicing support for homosexuals during the whole Indiana thing, so this was a no-brainer.”

Anticipating the millions of racists that would be taking advantage of the deals, store locations in Southern states opened three hours early this morning. Lines already began forming yesterday evening, with thrift-seeking bigots pitching tents as early as 3 PM. When doors finally opened at 6 AM, thousands of consumers were already standing by.

“I skipped work and called the kids in sick from school today,” said Charlene Stokes of Charleston, South Carolina. “There was no way we were passing this up.”

“I was gonna buy all this stuff for 4th of July anyway,” said another eager shopper, Mitch Beasley. “So this is kinda like an early Christmas.”

Predictably, the combination of amazing deals and white supremacy has led to in-store chaos.

A riot broke out when a man, who was under the assumption that Duck Dynasty merchandise was covered by the sale, smashed a glass case in an act of protest, inciting others to do the same. Another fight erupted when five people simultaneously grabbed the last XXL T-shirt of a Civil War-era Tweety Bird resting a musket over his shoulder with “The South will wise again!” emblazoned across the chest. Perhaps most tragically, a woman was trampled to death after the announcement of a last-minute price slash for Robert E. Lee beach towels.

Since much of the police force had taken the day off to enjoy the sales as well, controlling the crowds proved particularly difficult. Despite setbacks, Walmart has expressed satisfaction with its sale figures so far.

Thirsty for more Walmart magic? Check out 40 Photos That Could Only Happen At Walmart.