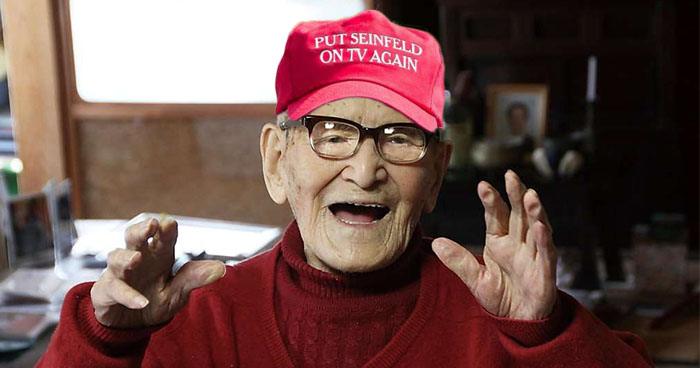 A group of British tourists were in for quite a shock this past weekend, when a hiking trip turned into a startling encounter with 91-year old former Japanese infantryman Sato Tanaka.

Tanaka had been surviving alone in the jungles outside Bali since 1944, unaware that World War II had been over for seven decades. While the strange phenomenon of Japanese Military “holdouts” is not exactly new, Tanaka’s case is a bit more out of the ordinary, as years upon years of isolation from the outside world did not stop him from somehow being not only aware of the classic sitcom “Seinfeld,” but a huge fan of the show as well.

“It was quite a shock,” said hiker Amanda Taylor. “To see this old man jump out of the bushes, dressed in a tattered military uniform and brandishing a bayonet… it was just so surreal. But not as surreal as it was to hear him say ‘Hello, Newman’ when he first addressed us.”

How the survivalist nonagenarian became aware of the long running NBC sitcom remains a mystery, but it is an undeniable testament to the show’s massive cultural impact.

“Once we showed him we weren’t a threat, he reluctantly put down the weapon and mumbled something in Japanese,” said hiker Jason Shaw. “We all took turns introducing ourselves, and I introduced [fellow hiker] Brian [Wilcox] as my partner, to which he smiled and said, in broken english ‘not that there’s anything wrong with that.’ We all had a good laugh at that one.”

Tanaka was later taken to the Embassy of Japan in central Jakarta, where officials interviewed him extensively.

“The interview proved to be very difficult at times,” the embassy said in an official statement. “When pushed for more specifics on how he was able to survive for so long, and how he became aware of the American television show despite the fact that he lived in complete isolation, he would start to explain, but then say ‘yada, yada, yada’ just when we thought he was getting to key details. Not only that, but he jokingly said ‘Art Vandelay’ when we first asked him to state his name.”

An anonymous embassy official stated, “This could have been one of the biggest historical breakthroughs in our recent cultural past…but as of now, all we’ve gotten is ‘no soup for you!'”

At press time, Tanaka was heard asking members of the Japanese military if he could possibly get a Drake’s Coffee Cake, or perhaps a Junior Mint, as they are “very refreshing.”