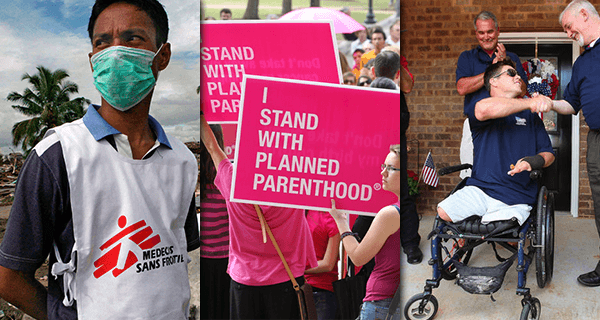 There are so many wonderful causes out there to support, but since there’s only so much an individual can give, it can be hard to narrow it down. Here’s a list of some organizations that are doing invaluable work to better the world. Unfortunately, you have to provide a mailing address for all of these, which means you’ll probably get halfway through filling out the form before closing the browser window and giving up.

This American nonprofit seeks to break poverty by providing safe drinking water to developing nations. With 660 million people who lack access to safe water worldwide, Water.org’s mission has never been more necessary. But you know what’s unnecessary? All that mail you’re probably gonna get from them. Pass.

Founded in France as Médecins Sans Frontières, Doctors Without Borders provides emergency medical aid to those suffering epidemics, conflicts, and disaster. They could really use your support, but uch, why is your address a required field? This is too annoying. They solved Ebola anyway, right?

American Foundation For Children With AIDS

Sub-Saharan Africa has been the region most affected by the HIV/AIDS epidemic, which AFCA has been fighting against since 2004. It would be difficult to find a cause worthier of your attention and money, but honestly, it’s a little creepy that they need to know where your house is. Feels like the NSA would be all over this. Not worth the risk.

With one in four Native Americans living in poverty, the United States government’s continued indifference to the people they stole this land from is nothing short of criminal. By donating to the American Indian College Fund, you can help needy students get the college education they—shit, they’re asking for your home state? It’s not that big of a deal, but it’s just like, why? Is this so they can sell your information to Facebook? No thanks.

Centre for Victims of Torture

Providing care for survivors of the world’s deadliest wars, CVT has rehabilitated over 30,000 people who suffered unspeakable pain at the hands of fellow humans. You’re lucky enough to never know the horrors of waterboarding, but you know what horror you do know? Your kitchen counter, which is covered in mail right now. How how many times is Banana Republic gonna send you the same credit card offer? If you see one more piece of junk mail, you’re gonna go insane.

Homes for Our Troops

Veterans put their lives on the line to keep people like you and me safe from the threat of outside enemies, which is why it’s especially devastating that they make up 11% of the homeless population. If you don’t have money, you can volunteer, which…oh. Entails filling out this form. Huh. Like, it’s not that you really care about giving out your apartment buzzer number, but it’s just kind of annoying, since your Autofill extension plugs in your old address. If you’re too lazy to fix that, will you even show up to your volunteering shift? Probably not. Better email yourself a link to this as a reminder that you’ll never look at again.

With all this buzz about being defunded, there’s probably enough awareness about PP, right? You totally stand with it, but signing this petition isn’t gonna be the thing that saves it, so you might as well keep your identity anonymous. Your address is definitely available publicly in other places, but it just feels more dangerous for some reason, ya know?