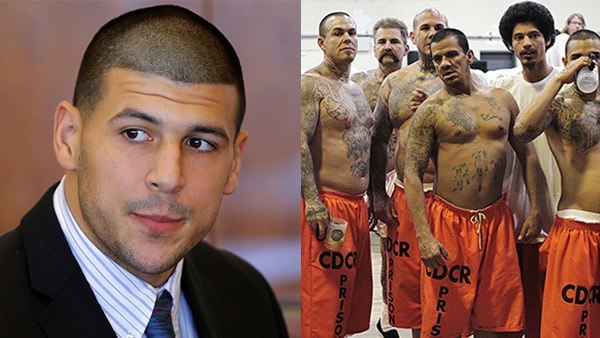 Less than 24 hours after Aaron Hernandez was sentenced to life in prison for first-degree murder, the ex-NFL star has already signed a four-year contract with one of the most threatening gangs in the prison system today, Nuestra Familia.

Nuestra Familia made Hernandez their first pick, beating out other gangs such as Ñetas and the Mexican Mafia who were also scoping out the season’s most sought-after murderer. The Aryan Brotherhood was apparently also considering drafting Hernandez, but decided a half-white member wasn’t a risk they were willing to take; instead, they went with Robert Durst.

Hernandez’s base salary will be a whopping 7 cigarettes per year, a higher figure than any new recruit in recent memory. The contract also includes a signing bonus of 13 postage stamps and series of shower and yard bonuses that would add up to 8 forks and a cell phone. Additionally, Hernandez will receive one toothbrush per inmate he makes his bitch.

The impressive contract is indicative of Nuestra Familia’s long-term investment in the recently convicted murderer. “We loved his dedication to the Odin Lloyd murder,” said one member. “And we’re feeling very positive about his chances of being found guilty of the 2012 double-homicide later this year.”

With Hernandez in the lineup, the gang might just have what it takes to beat rivals Nazi Lowriders this year.

“Aaron embodies our mission of being the most brutal, blood-thirsty, and calculated convicts out there,” said the Souza-Baranowski Correctional Facility chapter’s leader. “We can’t wait to see what he does in the showers.”

Interested in more high profile murder cases? Check out HBO Orders 12 More Murders From Robert Durst. And be sure to like Runt of the Web on Facebook before you go!