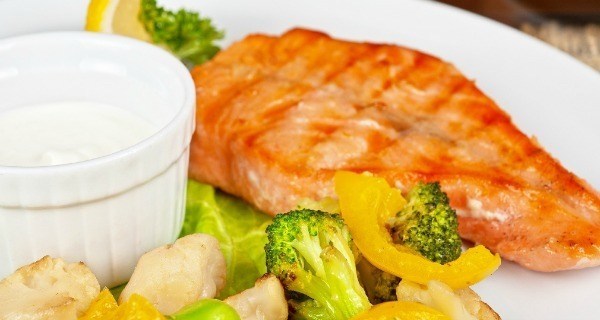 Things turned around for a leftover piece of salmon Sunday evening when the man eating him said a few kind words, at exactly the right moment.

The wild-caught, Alaskan salmon, topped with a tangy pineapple salsa, and served with fresh green beans and a side of wild rice, was going through one of the worst days to have befallen him in quite some time. “I was feeling super overwhelmed,” says the salmon.

The sockeye, who last week had begun the journey back to the freshwater natal stream he called home, was trapped by fishermen off the Pacific coast, ending what was an already terrible week. The previous Friday, he joined a few friends for their weekly upstream leap group, but had slipped and landed headfirst on a rock, much to the others’ entertainment. To make matters worse—in addition to constant pecking from the seagulls above—he experienced a near-death tussle with a grizzly bear, making him late to he and his wife’s spawning session.

“Then this morning, my little sister got caught in an old plastic bag—again—so I had to bail her out like I always do. All that, plus being killed and eaten for my meat, it just all kinda caught up to me I guess,” recalls the leftover fish. “Plus, I don’t know, I was just feeling kind of fat at the moment or something. And not the good kind.”

Feeling sorry for himself, the tender fillet was about to give up all hope. It was then that, with a few casual words from marketing assistant Brett Newell in Reno, Nevada, the perspective changed for this lucky little aquatic vertebrate.

According to star of the $21 dish, he overheard Newell praising his meal, remarking to friends that it was the best salmon he’d ever tasted. “Wow, the skin is so crispy. And it’s medium-rare with that pink center, not cooked through like at the last place we went to that fucked it up.”

“I could hear him say it just before he had a bite of the pineapple salsa, and it just really meant so much,” recalls the fish. “He probably doesn’t realize it, but it was exactly what I needed to hear at that moment.”

Newell was unable to finish the dish, however, as he had “a monster burrito at around 5 pm.” The remaining parts of the salmon were discarded by a busboy and thrown out with the rest of the trash for the evening.