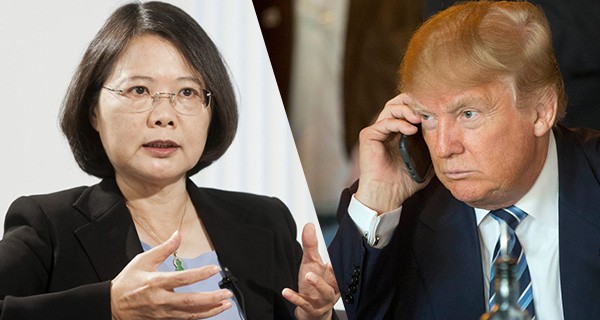 A recent international faux pas by President-elect Donald Trump has a reasonable explanation after all, as White House sources have revealed Trump was only attempting to order Chinese food when he called Taiwanese president Tsai Ing-wen. Trump explained that the conversation was brief, and he originally dialed president Tsai because her name sounded “pretty Chinese.”

“We said our hello’s, or in this case, we said our konnichiwa’s,” Trump remarked. “Of course, she congratulated me and I did the same for her. And for a woman to be elected president, what a tremendous accomplishment. I can think of no woman more deserving of such a great honor,” he said with a smirk.

For her part, president Tsai was quite positive about a call that began with Trump ordering egg rolls and orange chicken, then demanding “Real utensils, not those cheap little sticks.” As their conversation progressed, Trump told president Tsai that her island would be a wonderful site for a Trump golf course, as he “Knows those Asian chicks love their golf!”

Less happy was White House press secretary John Earnest, who expressed serious concerns over the conversation, explaining that “accidental phone call or not, the United States adheres to a One China policy. Supporting some small democratic island in their attempt to gain independence from a Communist nation goes against everything we as a country stand for. For all intents and purposes, there is no Taiwan. Except when it comes to arms deals, and even then, we try to refer to the country as ‘Little China’ to avoid any issues.”

The Chinese government, while unhappy, put the majority of the blame on the Taiwanese president. To prevent further communications, it has put in a formal request asking President-elect Trump to block president Tsai on Twitter. The U.S. government has assured China that after enough exposure to Trump’s tweets, president Tsai will likely do the blocking herself.

Trump himself has taken a strong stance against China’s interference and what he perceives to be “Old Chinese tricks.”

“Look, the Chinese, they’re making up climate change hoaxes. Now they’re telling us countries don’t exist. It’s absolutely terrible, and quite honestly, that could be the last time I order Chinese food.”

Trump went on to repeatedly mention Taiwan’s potential as a “Fantastic bargaining chip” to use against the Chinese, while incorrectly referring to the nation as “Thailand” six times.