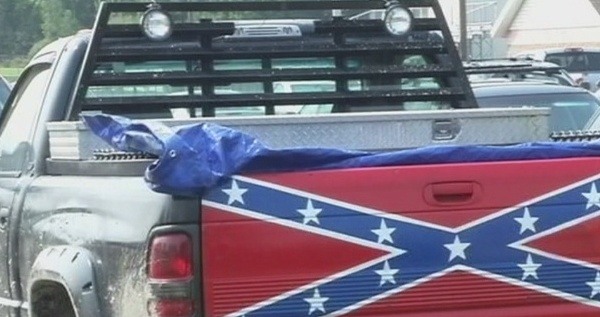 Local part time roofer Garrett Winton was seen driving his 1998 F-350 pickup with a Confederate flag painted across the back earlier today. Locals noted that Winton must have been really busy this morning due to the fact that he had completely forgotten to attach the sleeves on his red flannel shirt.

Local hairdresser Susan West explained, “Well at first I was going to point out to him that he definitely was missing some sleeves on that shirt.” West reiterated that, “it was definitely the type of shirt that you would wear in the winter, but for some reason he must have completely forgotten to put those sleeves on… must have a lot to do today.”

Pastor Jerome Green of the Peace Baptist Church in Charleston claims that he knows Garrett Winton is a busy man. “Oh ya I see him maybe once or twice a week, he’ll drive by multiple times in his truck and whistle at the women getting out of church.” Pastor Green went on saying, “that’s a packed day, I can imagine forgetting a thing or two every once in a while.”

“I don’t think I’ve ever seen him with sleeves on his shirt,” explained Applebee’s manager Becky Gillibrand. “Garrett’s in here probably four to five times a week all alone ordering appetizer after appetizer.” She continued on, “he obviously seems like a super busy man just by the way he dresses, but I’m glad he’s able to sneak us in to his schedule so much.”

Sources close to Garrett have confirmed that there are some people in his life even busier than he is. Rumor has it that acquaintance Clint Hutchinson not only drives a 2002 Dodge Dakota with a worn out “Not My President” bumper sticker, but is so busy he hardly ever remembers to put in the rest of his teeth.