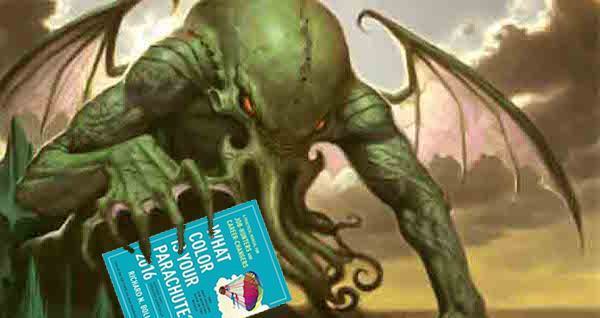 As America heads into another depressing farce of a presidential election, voters and politicians alike have been inspired to do some serious soul searching about what they really stand for. However, nowhere has this been felt more deeply than within the collection of vast inter-dimensional monstrosities that inhabit the spacetime adjacent to Earth.

“We’ve all had to face up to the fact that we need to expand our skill sets a little,” admits Cthulu, Destroyer of Worlds. “We’ve always been pretty confident in the fact that, when it comes to driving the Earth to despair, insanity, and ruin, we’re the only guys for the job, but after seeing the recent Republican presidential debates, that doesn’t feel like such a sure thing anymore.”

It was while watching the debate during a make-your-own-pizza party at the dwelling of Gloon, the Corruptor of Flesh, that Azathoth, Ruler of the Outer Gods, first voiced his concerns to the other Great Old Ones present. He quickly discovered that he was not alone in his fears that any one of the GOP candidates would be able to bring about the End Of Times faster, and more efficiently, than he or his colleagues.

“It’s just tough to see yourself being made redundant, you know?” comments Ialdagorth, The Dark Devourer. “You do a job for a certain number of eons, and you think, hey, I’ve got this down. But then a bunch of hungry new kids come in and you realize you can totally be replaced. I mean, we’re all more than capable of reducing the world to ash and cinder, but the current Republican party is doing the same thing while convincing people it’s a good idea. What the shit is that about?”

“I’ll be honest, those guys terrify me,” confides Gog-Hoor, Eater of the Insane. “I need this job—I have 10 billion star-spawn to feed, what am I supposed to do if I get the sack? How do I tell my flesh-mate that I had to leave my position as eternal tyrant of the reverse dimension because Ted Cruz was more qualified than me?”

“It’s just really demoralizing to be beaten at your own game,” commented Ialdagorth, who also goes by the alias “The Malevolent Mist.” “Until now we’ve been blinded by the desire to wipe out humanity in a crippling bout of doom and destruction. But taking away fundamental human rights one by one until it’s too late and the human race realizes it only has itself to blame for their ultimate demise? Pure brilliance.”

Gog-Hoor and Ialagorth have not been the only ones to worry for their futures, and several of the Outer Gods have signed up for courses to stay relevant in the demanding and increasingly crowded Armageddon field. “Baoht Z’uqqa-Mogg, The Bringer of Pestilence, is taking a public speaking course,” enthuses Azathoth. “We always thought it would be tough to get a crowd to rally around him, being a giant flying scorpion with an ant’s head who’s constantly surrounded by a huge swarm of stinging insects and all. But then we saw Trump do it and we were like, okay, well, that’s the heavy lifting done for us.”