Hipster Groundhog Was Seeing His Shadow Before it Was Cool 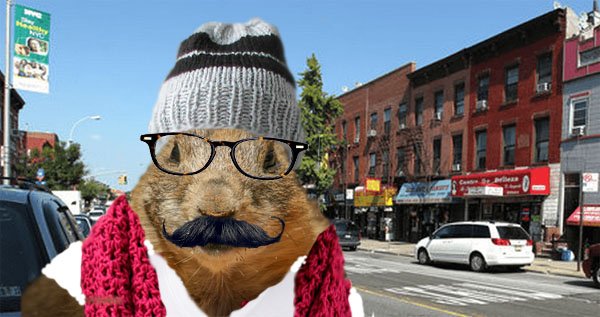 Lying in his indoor hammock and staring thoughtfully at the Manhattan skyline from his tastefully crumbling loft in Gowanus, Punxsutawney Phil bemoaned how commercialized groundhogs seeing their shadow had become.

“Wiarton Willie…Pierre C. Shaddeaux…Staten Island Chuck…they’re all posers. None of them were there in the beginning,” Phil said between pulls on his vape. “I was seeing my shadow before they had munched their first twig.”

Punxsutawney Phil, named after the Pennsylvania town of his origin, is best known for his ability to predict how much longer winter will last based off whether he can see his shadow. He recently retired from the public eye and moved to New York, however, blaming a younger generation of groundhogs who he feels lacks the “authenticity” of their elders.

“It wasn’t always about the weather, man,” Phil lamented as he donned a knit cap that matched his suspenders and capri khakis. “We did it out of passion. Hey! There’s my shadow! Hey! Too cloudy, no shadow! It was a really cool scene back then. It should be about discovering yourself, not giving people some fucking snow report. It’s all that damn Bill Murray’s fault,” he concluded, sighting the 1993 film that he said portrayed himself and his fellow groundhogs as “vapid and undignified” creatures.

Since shadow spotting has gone “mainstream,” Phil has dedicated himself to new hobbies – collecting antique cameras with no practical purpose, listening to a lot of Wilco, wearing Roseanne T-shirts, and talking about how he doesn’t see race. Recently, he tried to reinvent his image by submitting some Instagrams of his shadow using the Mayfair filter to a nearby coffeehouse. The night ended poorly, however, when an insensitive visitor saw his pictures and asked, “so is it going to snow, or not?”

Phil couldn’t help himself, and visibly distressed, screamed “Fucking fascist!” at the patron. “You wouldn’t know cool if it poked its head out of the ground and nibbled on your ankles. You’re just a shadow yourself, dude! Think about it.” He then retired to his loft to indulge in a bowl of goji berries and quinoa since he considers grass, acorns, and other standard groundhog fare passé.

When asked what his next step might be, Phil hinted that he might try predicting the length of summer based off of the swirls in his Americano espresso, or matting his fur entirely with mustache wax. His fallback plan is applying to grad school for a degree in creative writing.