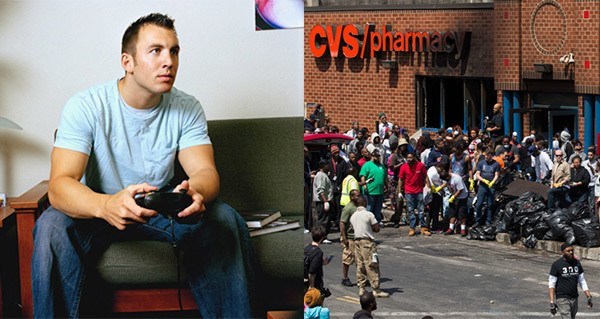 After taking to Facebook to break his silence on the situation in Baltimore, 37-year-old Mike Dunn has resumed his normal Grand Theft Auto V duties.

The ad sales manager arrived at his Jersey City apartment on Tuesday at 6 PM after an “insanely brutal” day at work, turning to his PlayStation 3 to blow off some steam. Just after he punched a prostitute in the face on the way to looting a strip club, he took a break to check his Facebook feed, where he noticed a flood of posts about the violence in Baltimore.

Dunn saw that “shit was apparently going down” and scrambled to come up with an opinion on the matter. After an exhaustive search where he skimmed three headlines and quickly Googled “Rodney King” for a quick refresher, he posted his own status update on the matter:

Violence is NEVER the answer. Why would you destroy your OWN community? I’m no expart [sic] on civil rights, but rioting is immature and unproductive. What a shame that people who just want free stuff are ruining it for the good guys. Stay safe y’all. Peace.

Moments later, Dunn returned to GTA V to learn that he had forgotten to pause the game and that the 13-year-old he was playing against had murdered his character. “I was just about to kill Floyd!” he cried. Punching the wall in frustration, he screamed, “That’s some BULLSHIT!”

Despite his distressed state, Dunn mustered up enough courage to start the BZ Gas Grenades mission in Los Santos. However, at the time of this article, he had not yet cleaned up a bowl of Cheetos he threw to the ground.

If you’re craving more white dudes mishandling race in America, be sure to check out Nation Asks PBS To Hide History Of Ben Affleck Movies.