Man Stabs Roommate 47 Times For Pronouncing Espresso With An X 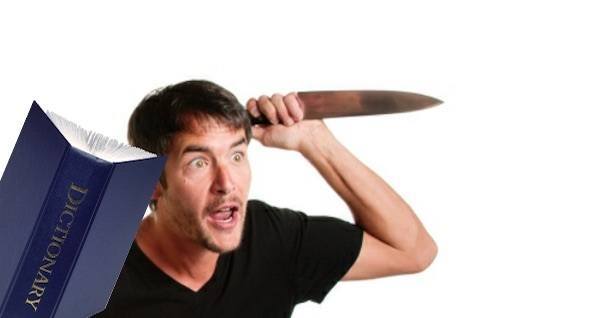 Neighbors who pronounce mischievous “mischevious” are urged to stay indoors.

An Ohio native escalated the term “grammar Nazi” to new heights in Huntington, Ohio yesterday after stabbing his roommate 47 times for mispronouncing the word “espresso.”

Fred Gelman was stabbed to death in his apartment by roommate George Heck, with what witnesses describe as very little warning. “There were no sounds of an argument,” recalled Sam Kent, the neighbor who called the police. “The walls are paper thin in this apartment complex, so we can hear pretty much anything. Fred just asked George if he’d like some kind of fancy coffee, and the next thing we heard was a bloodcurdling scream of rage, followed by a noise like someone hollowing out a large pumpkin.”

Police arrived to find Gelman, 38, dead from approximately 47 stab wounds, while Heck, 34, stood nearby holding a bloody kitchen knife. “I told him,” confessed Heck, “I told him that if he said ‘expresso’ instead of ‘espresso’ one more time that I was gonna kill him, but he didn’t listen.”

Kent claims that this wasn’t the first act of violence spurred by bad pronunciation. “I heard Fred say ‘irregardless’ to George once and the next day I passed him in the hall, he had a black eye,” said Kent. “He told me that he ran into a door, but I knew better.”

“Everything he said was wrong,” Heck told police. “‘ATM machine,’ ‘liberry,’ ‘nucular’—I put up with it for years, but I just couldn’t take it anymore. He said one ‘expresso’ too many and I reached my breaking point.”

Jury selection has already become a hot topic around the case, with defending attorney Sally Eastman keen to find frequenters of Internet comment sections among the potential jurors. “If you got me a jury comprised entirely of those guys, I could get Heck off by Wednesday,” Eastman commented. “All I’d need to do is show them a note Gelman left on the fridge saying, ‘You’re turn to buy milk!’ and they’d unanimously call it justifiable homicide.”

Heck gave himself up to police willingly and didn’t resist arrest. When asked if stabbing Gelman 47 times was an overreaction, Heck responded, “He butchered the language, so I butchered him. Call it an ie for an ei.”