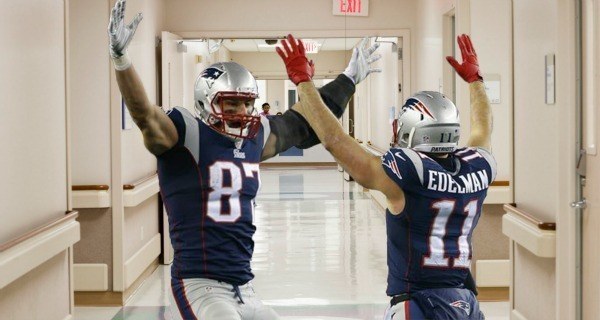 Pictured: The twelfth consecutive Bingo win against that asshole Mr. Ramirez from Oncology.

Though the New England Patriots started out with one of the strongest seasons in the NFL, a string of debilitating injuries led to two consecutive embarrassing losses in recent weeks. What was shaping up to potentially be an undefeated season going into the playoffs has now turned into Boston’s golden boy Tom Brady just fighting for the second seed spot unaided by a largely injured receiving lineup.

However, while the Patriots may not have gone undefeated in the NFL this season, the Pats were happy to report that the injured list has at least gone 12-0 in hospital bingo! When asked what gave his team the motivation they needed to succeed in the harrowing world of parlor games, Brady said, “These guys just give it 100% every time. They don’t know the word ‘quit.’ All they know is that one foot comes after the other, and that B11 comes after B6.”

Tight end Rob Gronkowski joined the plagued crew of invalids after an unspecified knee injury three weeks ago. “I know people are saying it’s weird that I won’t give a clear and definite answer about when I’ll return to the field,” Gronk said. “The truth is, it really depends on how the next heat of Mass Gen Bingo Night goes. I can’t leave my boys hanging, and that Mr. Ramirez from the senior center is a real shark.”

Offensive linebacker Dont’a Hightower reported that he “felt mad relieved” to be joined by teammates Julian Edelman, Patrick Chung, Danny Amendola, Scott Chandler, Justin Coleman, and of course, Gronk. “When I got here, it was just me,” reported Hightower. “Do you know how hard it is to stay undefeated in a game of pure chance for six straight weeks? Even Tom doesn’t know that kind of pressure.”

When asked if he thought they stood a chance of going undefeated for the entire season, Gronk said, “We’re really trying not to get ahead of ourselves here. We know that we could go the distance. We have the skills. But it’s gonna come down to who can organize their Bingo tiddlywinks most effectively, and right now we’re losing time when we play multiple sheets.”

Wide receiver Julian Edelman responded to inquiries of who they perceive to be their biggest threats, stating “there’s a Mahjong club that’s pretty ruthless, and it seems these days they’ve set their sights on Bingo.” He also reported that a group of kids in the pediatric wing for physical therapy “have really improved over the course of the season and become a serious unanticipated threat.”

Added Edelman, “Last week, they got an entire row of B’s before we knew what hit us. They didn’t even use the free square!”

With the end of Bingo season in sight, however, there’s still no rest for the weary. Gronk reported that even now, the team is beginning to practice for the hospital’s biggest annual event: Canasta Night.