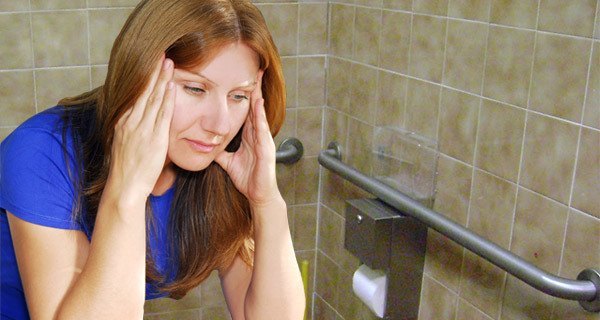 A Wyoming woman using a public restroom was forced to engage in an epic waiting game last week after a mother and young son entered the stall adjacent to the one she was using. Due to the observant nature of the talkative child, the risk of embarrassment was too high, leaving the woman with no choice but to await his departure before shitting in the restroom of a retail chain.

Dana Tsosie, 42, was shopping at Barnes & Nobles on Wednesday afternoon when she suddenly needed to utilize the restroom facilities. “Barnes & Nobles has one of the nicest public restrooms I’ve ever seen,” Tsosie said. “The store wasn’t crowded at all, so I just assumed no one would be in the bathroom.”

According to Tsosie, she entered the empty restroom at around 12:30pm, making her way to the stall farthest from the door. “I had to…go, you know,” Tsosie says, referring to the raisin-bran muffin and black coffee she enjoyed for breakfast earlier that morning.

All was well until a mother and her young child entered the facility, occupying the larger handicapped stall directly beside the one Tsosie had settled in.

“Usually when I see a mom and her kid in a bathroom, I don’t feel too self-conscious. I just assume unpleasant bodily functions are probably pretty well within that lady’s wheelhouse,” Tsosie says.

Things took a turn for the worse, however, when the child began speaking with his mother, pointing out simple but accurate observations of his surroundings. “When I heard the kid I was just like, ‘Oh fuck’,” Tsosie recalled. “I once saw a kid taunt a waitress to the point of tears at The Cheesecake Factory, so I wasn’t about to take any chances.”

Fearful that the child would jump at the opportunity to point out any embarrassing sounds or odors, Tsosie decided to wait the pair out. “I mean, noticing the koala on the baby-changing table is one thing, but when that little boy referred to the grey shoes I was wearing as ‘grey shoes!’ I knew I had no other choice,” Tsosie states.

And so Tsosie waited for a painstaking 12 minutes as the child rambled on about the family dog, asked numerous questions about his friend “with two daddies,” and repeatedly screamed “KEYS!” at the top of his lungs.

“About seven minutes in, I heard someone unroll a bunch of toilet paper, and I really thought the nightmare was over,” Tsosie explained. “When I saw it pile up onto the floor and heard the kid laughing, my heart just sank.”

While the standoff did eventually reach a peaceful ending, Tsosie is determined never to get caught in such a position ever again. “I shoulda just drove home,” she says. “I live, like, literally six minutes away.”