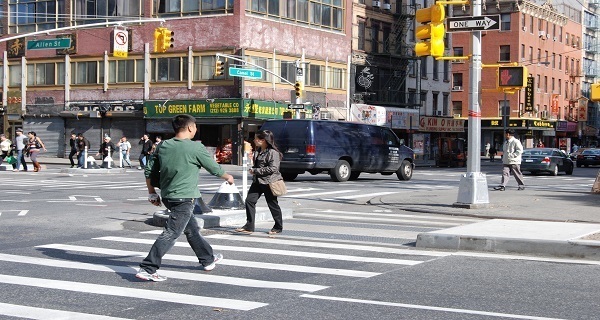 While walking back to his Lower East Side apartment, pedestrian Mark Holmes was stricken by a series of emotional fluctuations after a driver, who still remains at large, honked at him as he crossed the street earlier today.

“I had the green light, same as him,” Holmes, 21, muttered to himself, his thoughts vacillating between feelings of intense embarrassment and anger. “And it’s not like I darted out in front of him or anything. Christ, what an asshole.”

Moments after safely making it to the southeast corner of Allen and Canal Streets, Holmes had already devised several revenge fantasies for how he would have dealt with the situation if he were given another shot.

“I should have flipped him off or told him to go fuck himself,” Holmes said, his mental state eventually seguing from confident rage into shame, “but then I would be that jerk who starts fights in public. Or does the fact that I’m worrying about it just make me a pussy?”

In the course of his wild emotional cycle, Holmes analyzed his own clothes, pace, and posture in an attempt to understand what brought on the seemingly unjustified horn blare.

“Do I look like the kind of guy you can just mess with like that?” Holmes asked himself. “Or maybe he just thought he recognized me.”

In near instantaneous succession, Holmes almost let the incident go before the cycle of inner thoughts turned to the vehicle’s operator.

“Maybe he had an emergency, or his kid was sick in the car,” Holmes wondered empathetically before assigning malign intent onto the incident. “Or he could’ve just been some impatient prick. He was driving a truck, and you know all those people are assholes. Fucking jerks.”

Upon reaching his apartment, Holmes resolved to spit on the windshield if such an incident ever occurred again.