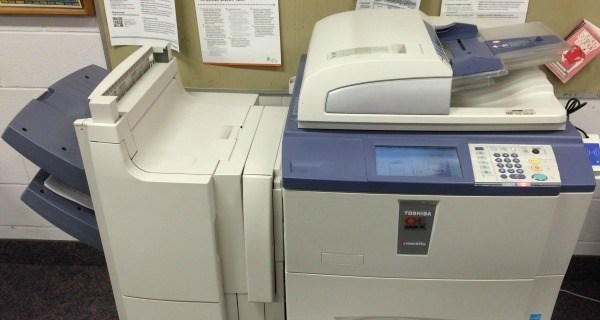 As the partisan divide seems to deepen each day, Republicans and Democrats have found common ground on one issue: the Library of Congress printer to the left of the bathrooms always jams at the worst possible moment.

What began this morning as a frustrating setback proved to be the first opportunity in years to see eye-to-eye on an issue. The problem was first noticed when John Boehner heard it making “weird sounds” while he tried to photocopy a proposed repeal of Obamacare. Nancy Pelosi, who was next in line, lamented that it was doing the exact same thing to her yesterday.

“Plus, the feeder tray decided it was done,” she explained, “So I had to photocopy all 957 pages of an NSA report manually on the printer bed. Which it printed on 11×14 paper because why would ANYTHING work around here.”

Boehner quickly suggested they not even get started on how it doesn’t staple.

Paul Ryan, who was waiting to make some last minute happy hour flyers, affirmed that printers are the worst. “I remember once I was scrambling with the budget, which—typical me—was due in an hour. Then, as if on cue, it runs out of cyan ink, which for some dumb reason means it can’t do black and white.”

Bernie Sanders walked up to him and nodded in agreement. “It’s like it has a sixth sense for when you need it the most.” This sent everyone into an echo of understanding groans.

“It’s 2015. We should have better printers by now,” grumbled Rand Paul.

When Elizabeth Warren approached with a pamphlet on equal pay, Ted Cruz broke the news that it was gonna be a while since printers are the worst. She told him she knew all too well. “If something actually worked in this place, we’d all go into a state of panic,” she joked.

After an hour, IT support arrived and resolved the issue. Wishing to extend the moment of mutual understanding a little longer, Marco Rubio asked if anyone knew how to scan a document as a PDF to email, which everyone concluded was a lost cause.

Looking for other goings on in politics? Check out Donald Trump Announces Presidential Bid By Slowly Pushing Cash-Filled Briefcase Across Table.