Rookie Train Conductor Still Finding His “All Aboard” Voice 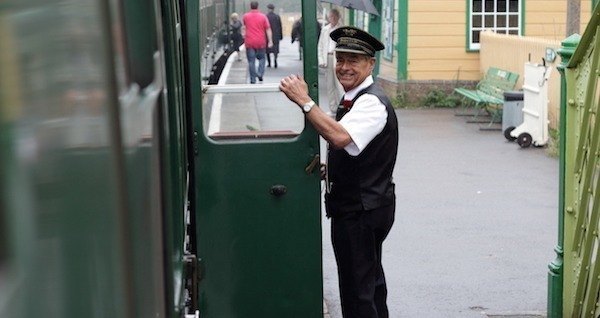 Artie Nesmith knew there would be many challenges to his latest job as a New Jersey Transit train conductor, but he wasn’t prepared for perhaps the most basic one: saying “All aboard.”

“It’s not the sort of thing they teach you in train school,” said the 53-year-old, who hails from South Orange. “But I’m learning it’s a big part of the job.”

Although there are no official rules specifically relating to the “All aboard” phrase, Mr. Nesmith says that NJ Transit customers have come to expect the traditional phrase. Currently working the Morristown line, Nesmith has the opportunity to say “All aboard” a total of 26 times from Penn Station to Hackettstown, and that’s a lot of pressure for a new recruit.

“I’ll admit it,” says Nesmith. “When I first started I was just copying the greats who came before me—guys like Jimmy Fitz and Gary ‘The Whistle’ Glenister, but over time, I realized the passengers deserved more.”

In the months that followed, Nesmith had some false starts in his attempts to find his true voice. The rookie conductor speaks sheepishly about the day he selected a different passenger to make the announcement in his place at each stop. “I told myself it would be fun for them, but ultimately, I realized I was just shirking my own responsibilities. Also, there was a union issue.”

At one point, Nesmith became desperate enough to start adopting accents. “Once I did this kind of deep, booming British voice, y’know, like a ‘Good day, sir,’ but the passengers got confused. One old lady thought she’d boarded a train to London, and even when we explained that you can’t take a New York train to London, she was still freaking out all the way to Lake Haptoong. It was a whole thing.”

Despite his rocky start, Nesmith expresses hope that comfort will come with experience, and is optimistic for the future. “I’m starting to believe I deserve this,” he says, straightening his cap. “It’s only a matter of time until I find a voice that says, ‘Hey, this is me, and you gotta get on the train now, because, y’know, it’s leaving.'”