NYPD Prepares To Not Arrest Any Drunk, Disruptive White People At SantaCon 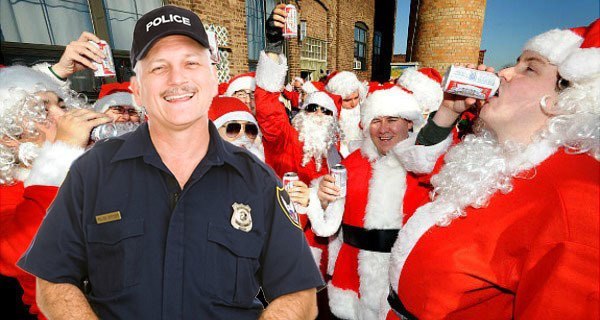 As New York gears up to celebrate its 19th annual SantaCon festival, the often trigger-happy NYPD prepares to do absolutely nothing in the face of the debaucherous mayhem.

Over 350 other cities across the globe will join NYC by hosting their own SantaCon festivals, and while the particular customs and events differ greatly, their respective police forces remain hearteningly unified in a common goal: not arresting any white people whatsoever.

While the New York Times has described SantaCon as “sexism, drunkenness, xenophobia, homophobia and enough incidents of public vomiting and urination to fill an infinite drunk tank,” the NYPD has described the event as, “having almost no black people and so we don’t really give a shit.”

The NYPD reports that it was initially concerned, however, over the recent news that this years’ SantaCon will begin in Brooklyn. Officer Mike Rinaldi said, “Brooklyn is like, 36% black people, so it poses a new and very serious dilemma about how involved we should be in the event.”

This is a staggering increase from the location that formerly kicked off the festival—the Lower East Side—home to less than 7% black residents.

Rinaldi seemed palpably relieved, however, when he learned that the event had been moved to Williamsburg this year, grinning, “That place is, like, whiter than Connecticut!”

Minnesota’s SantaCon will follow New York’s by a week, where their police department is readying themselves for a similar amount of nothing. Said Minneapolis police officer Kelly Rhine, “We need to keep ourselves focused on the real threat, which is people engaged in peaceful protest against police brutality. It just doesn’t feel right to shove a gun in the face of an unarmed 24-year-old white guy who just spent the last three hours destroying public property and urinating on homeless people, ya know?”

The 2013 SantaCon revelers boasted over $15,000 in damages to city and private property, and the NYPD was happy to report zero arrests for the season. “They’re just exercising their first amendment right, unlike those rebellious punks who feel like they deserve to not get shot in the back while complying with police orders.”

When asked where they would be instead of policing the event, the NYPD said, “Probably in the other part of Brooklyn.”