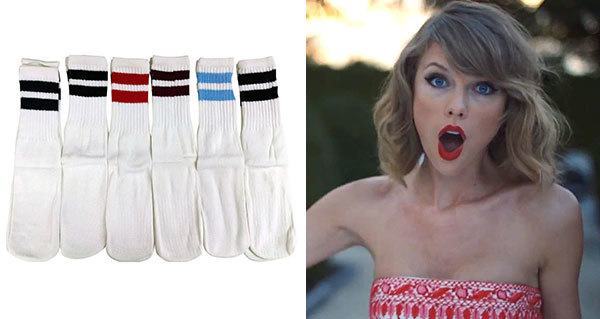 After purchasing TaylorSwift.porn and TaylorSwift.adult to protect her brand, Taylor Swift has taken the next step in ensuring that her image stays out of the sex industry’s hands: the singer has announced her plans to purchase the leading manufacturer of tube socks. As of Monday, Swift will become CEO of Global Sock Industries, an industry giant which owns hundreds of factories in China.

“I can’t control the fact that guys might be yanking it to me,” said Swift, “But if you do try to wrestle the one-eyed monster while imagining nailing me on top of the white stallion from the Blank Space video, it’s gonna be a lot more difficult now.”

Though unconfirmed, a source close to Taylor’s camp has claimed she has plans to buy the lotion company Jergens next.

“While it seems unlikely now, Taylor may be ‘sexy’ one day,” says one expert. “Teenage boys might be ejaculating into Taylor Swift tube socks filled with Taylor Swift lotion sooner than you’d think.”

Feeling better informed for reading this showbiz insight? You should continue your topical reading and learn how Ryan Gosling Cheated On Eva Mendes With A Pair Of Sweatpants.