This Woman Claims She Found A Urine-Free Movie Theater Toilet Seat. Is She Telling The Truth? 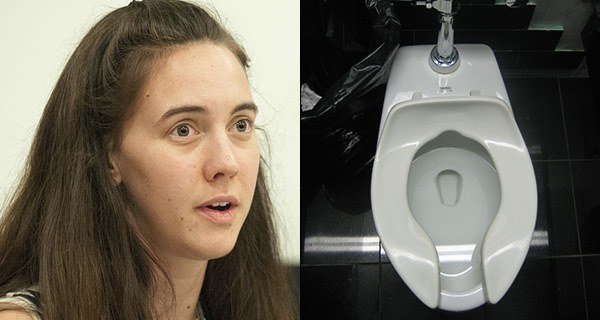 The rare phenomenon hasn’t appeared in decades and has not been able to be duplicated.

Greenlee, who had just come out of seeing My Big Fat Greek Wedding 2, claims she has never experienced a phenomenon like this before — especially not at a large movie theater chain, where bathrooms are almost always soaked.

“I ran out of the theater as soon as the credits started rolling because I had to pee so badly,” Greenlee said. “I was prepared to ditch attempting to find a semi-clean stall, and just resign to hiking up my coat, hovering over the seat, and then wiping with a tissue from my purse.”

However, just as Greenlee was about to do so, she noticed something extraordinary: the toilet seat displayed zero traces of a stranger’s urine.

According to a recent study by the University of Chicago, public women’s restroom toilet seats have a 94% chance of having urine on them, despite 96% of women claiming they “have no idea how a woman could even angle herself to get pee on a toilet seat, I mean seriously, how?”

“I was so shocked to see the state of the toilet that my bladder’s urges moved aside,” Greenlee explained. “But it got even crazier when I saw that it was fully stocked with toilet paper, had a fully operational flusher, and contained no menstrual blood in the bowl.”

After Greenlee hung her purse and jacket on the amazingly stable hook on the back of the stall door and slid the functioning lock into place with record-low trouble, she took a deep breath to calm herself. As she inhaled, she noticed that the air in her stall actually smelled fresh, instead of like the usual combination of ammonia and fish.

“Every factor in that stall fell into place too perfectly. I figured maybe an employee had just cleaned,” Greenlee said.

However, her theory was quickly dispelled when she heard a voice calling out from the neighboring stall. “Can someone pass me some toilet paper? Quick, please — my stall’s all out and it’s so gross in here.”

Greenlee suddenly realized that if her neighbor’s stall was missing toilet paper, it was highly unlikely that the bathroom had recently been attended to, no matter how smoothly it was flowing out of her own dispenser. When reached for comment, the theater’s manager confirmed that the bathroom was last cleaned the previous evening at 11 pm, almost 24 hours prior to the incident.

However, Greenlee didn’t let the unfortunate situation next door detract from enjoying an experience that she described as “glorious and exhilarating.” Once she sat down, without the normally required assistance of a paper seat liner, she allowed herself to fully let go of any lingering skepticism. “I forgot where I was. My soul left my body. Every woman deserves this.”

For the first time in years, Greenlee used her hand rather than a shoe to flush the toilet, and watched its contents quickly flow down the pipe. “Not one drop of water shot out of that industrial toilet and landed on the seat or my body. Not one drop,” she said in disbelief.

After emerging from the stall, Greenlee was greeted by the typical jarring movie theater bathroom environment. An unpleasant smell, wet counters, and harsh fluorescent lights suddenly flooded into her consciousness. She turned to see that an exhausted looking woman was next in line, promptly dragging her screaming toddler into the utopian stall.

“I didn’t look back,” she said bravely. “I couldn’t bear to see what they would do to it.”